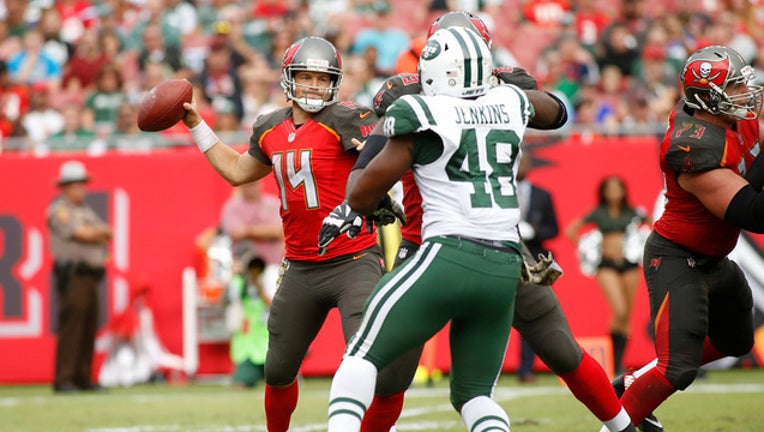 Quarterback Ryan Fitzpatrick gets protection from offensive tackle Demar Dotson during the fourth quarter of a game on November 12, 2017. (Photo by Brian Blanco/Getty Images)

TAMPA, Fla. (AP) - For Ryan Fitzpatrick, beating the New York Jets was not as much about getting the best of his old team as it was helping the Tampa Bay Buccaneers get back on track.

Filling in for the injured Jameis Winston, the 34-year-old quarterback was steady if not overly impressive in leading the Bucs to a 15-10 victory that snapped a five-game losing streak.

"I didn't play great by any stretch of the imagination. But we won the game, and I'm getting too old now to worry about that other stuff," Fitzpatrick said. "My job filling in right now is to do the best I can and try and grind out wins. That's what we did today."

Tampa Bay (3-6) sacked Josh McCown six times, nearly doubling its total for the entire season. The Jets (4-6) were held to less than 200 yards of offense until late in the fourth quarter, when McCown took to the air almost exclusively after Fitzpatrick's 6-yard touchdown pass to Charles Sims put the Bucs up 15-3.

"The quarterback was getting hit. He wasn't comfortable all day, and that's what football is all about," Bucs cornerback Brent Grimes said. "If you can make the guy that's controlling the game uncomfortable, it's going to be a lot easier for everybody."

Fitzpatrick, facing the team for which he played the past two seasons, completed 17 of 34 passes for 187 yards and was intercepted once.

The 13th-year pro, one of just four players in NFL history to throw TD passes for seven different teams, led a nearly eight-minute drive that produced a field goal in the first quarter. He finished a 15-play, 81-yard march, also lasting more than seven minutes, with his TD pass to Sims.

"Gritty, that's what Ryan is. He's a get-it-done kind of guy. He's going to make some plays that you don't expect him to and he might miss a couple plays you'd like him to make," Bucs coach Dirk Koetter said. "He's a tough guy. He's a competitor, and you can't have enough of those kinds of guys on your team."

McCown, also facing one of his former teams, was 23 of 39 for 263 yards, one touchdown and one interception. Robby Anderson caught a 38-yard TD pass in the final minute for the Jets, scoring for the fourth straight game to give New York one last chance.

The loss was especially disappointing for the Jets, considering how well they played in beating Buffalo the previous week.

"Very frustrating," McCown said. "(But) we understand this is the National Football League. You've got to bring your A-game every week. We just didn't come out and play at the level we're capable of."

Winston hurt his shoulder on Oct. 15 and made three more starts before the Bucs decided to shut him down for a minimum of two weeks. The Bucs also played without leading receiver Mike Evans, suspended one game by the league for his role in a sideline skirmish the previous week at New Orleans.

In addition to turning the ball over twice and allowing six sacks, the Jets hurt themselves with several costly penalties.

Jets coach Todd Bowles was unable to explain how his team could play so well against the Bills, then struggle against an opponent that had lost five in a row.

"You don't explain it. It's week by week," Bowles said. "You've got to show up every week in this league or you'll get it handed to you. We didn't show up today."

TOO LITTLE, TOO LATE

Despite finishing with 275 yards to Tampa Bay's 271, the Jets failed to move the ball with any consistency for more than three quarters. More than 100 yards came on New York's last two possessions, with McCown throwing on almost every play to try to cut into a 12-point deficit.

Jets: Played without RB Matt Forte, who didn't practice all week because of swelling in his surgically repaired right knee. ... CB Morris Claiborne left in the first half with a foot injury.

Buccaneers: CB Vernon Hargreaves III left the game in the second half with a sore hamstring and did not return.

Buccaneers: At Miami next Sunday, beginning stretch of three consecutive road games. Rescheduled from Sept. 10 because of Hurricane Irma.