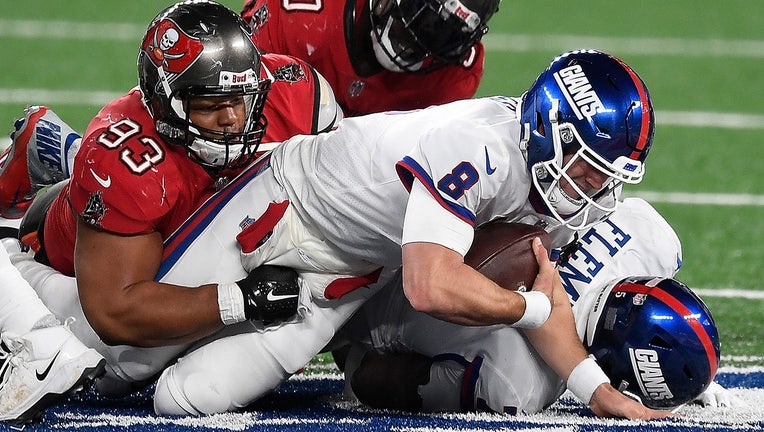 Daniel Jones of the New York Giants is sacked by Ndamukong Suh and Jason Pierre-Paul of the Tampa Bay Buccaneers in the second half at MetLife Stadium on November 02, 2020 in East Rutherford, New Jersey. (Photo by Sarah Stier/Getty Images)

EAST RUTHERFORD, N.J. - For a team not in the same division, New York Giants quarterback Daniel Jones has seen more than his share of the defending Super Bowl champion Tampa Bay Buccaneers.

The sixth player chosen in the 2019 draft, Jones got his first NFL start against the Bucs three games into his rookie season. Then coach Pat Shurmur benched two-time Super Bowl MVP Eli Manning after an 0-2 start and handed the job to Jones.

Round two came last year in a Monday night game at MetLife Stadium in early November. Jones is again preparing to face Tom Brady and the Bucs in Florida on Monday night.

The Giants (3-6) are coming off a bye week after winning two of three. The Bucs (6-3) are riding a two-game losing streak.

"I think each game is different and we’ve got to prepare for this game this week," Jones said after a short practice on Wednesday. "Like I said, there are things we’ll look to to see how they prepared for us in the past. But beyond that it’s really about preparing for this team this week and getting ready to play our best."

"The first half obviously wasn’t great," Jones recalled last week. "We did a couple things, but the second half and kind of just catching rhythm, making plays. The final drive I think was the thing I’ll remember the most."

Last year’s meeting was more forgettable. Jones threw two second-half interceptions that led to 10 points, including the go-ahead touchdown, as the Bucs rallied from a 14-6 halftime deficit to a 25-23 win.

"It wasn’t a great game for sure, and definitely things that I could’ve done better, things I learned from," Jones said. "Whether it was the low point, I don’t know. I think protecting the ball was big in that game and we didn’t do that great."

Jones learned from the mistakes. After the Bucs game, he did not throw an interception for two months, a run of 177 passes ended by Dallas safety Donovan Wilson in the final game of the season.

RELATED: Washington loss was a 'wake-up call' for Buccaneers

"Daniel, I’ve always thought has great potential and talent, with his legs and his arm," Arians said. "He’s improving every single week, it looks like to me."

Jones has had an outstanding season despite playing behind a line decimated by injuries. Left guard Shane Lemieux (knee) and center Nick Gates (broken leg) went on injured reserve by the end of the second week. Left tackle Andrew Thomas just returned to practice Wednesday after a month-long stint on IR with foot and ankle problems.

Jones has been the offensive catalyst. He is second on the team with 258 yards rushing — a 5.2 yard average — and two TDs. He also has hit 190 of 293 passes for 2,059 yards, eight touchdowns and five interceptions.

New York also might get the majority of its skill players on the field for the first time in a while on Monday. Running back Saquon Barkley, who has not played since Oct. 10 after spraining an ankle against Dallas, is close to returning.

Wide receivers Kenny Golladay and Kadarius Toney returned against Las Vegas in the win before the bye week. The major question mark is receiver Sterling Shepard, who has a quad injury.

The absences have forced coordinator Jason Garrett and Jones to be patient the last month.

"I think that has a lot to do with the defense you’re playing and how they’re playing you and what you’re doing well as an offense," Jones said. "I think understanding that, factoring that into your decision making and what you’re trying to do with the ball on certain plays, I think that is a big part of playing the game and playing the position. We’ll continue to do that, but look to take our opportunities when they’re there."

Remarkably, this will be the third time Jones and Brady will start in the same game. In his rookie year, New York played New England in Brady’s final season there.

"I think you talk about understanding what the defense is doing," he said of the 44-year-old Brady, "and making a good decision on where to go with the ball every single time."