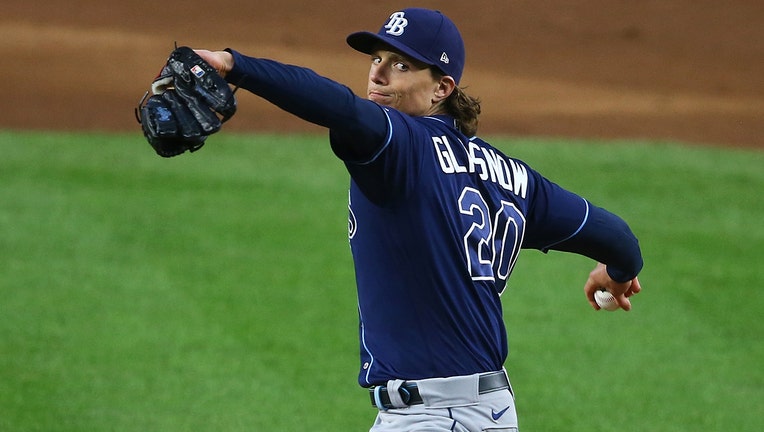 The AL East leaders improved to 7-1 against the Yankees this season and stretched their division cushion to 4 1/2 games.

New York had won three straight since snapping a seven-game skid but crumbled early with Cole, its $324 million ace, on the mound.

The 6-foot-8 Glasnow (2-1) had a no-hitter through five and completed six innings of scoreless, two-hit ball. He struck out nine and walked one while working almost entirely with two pitches — a fastball averaging 97 mph and a plunging curveball.

Glasnow lost his no-hit bid via replay review. With one out in the sixth, DJ LeMahieu hit a grounder that shortstop Willy Adames fielded deep in the hole. First base umpire Roberto Ortiz ruled Adames' throw beat LeMahieu, but that was quickly overturned.

A day after erasing a five-run deficit against the Mets when they were down to their final out, the Yankees crept back against the Rays but couldn't complete the rally.

Gio Urshela hit a solo homer off Edgar García in the seventh, and Luke Voit added his eighth homer in 12 games, a two-run shot off García in the eighth that made it 5-3. Voit has 13 homers this season, tied with Minnesota slugger Nelson Cruz for the major league lead.

New York had the potential tying run at bat with one out in the eighth, but Urshela struck out and Mike Tauchman popped up against Peter Fairbanks.

Diego Castillo stranded a runner in the ninth for his third save.

Cole (4-2) labored through five innings, allowing four runs, eight hits and four walks. He struck out seven — ending a six-game streak against Tampa Bay with double-digit strikeouts — and had a runner reach at least second base in each inning.

Cole has allowed 12 home runs this season, matching Ross Stripling for most in the majors. After his 20-game regular-season winning streak and 28-game unbeaten run ended last week against Atlanta, Cole dropped consecutive starts for the first time since April 2019 with Houston.

Neither the Yankees nor Rays finalized any trades before the 4 p.m. deadline. New York general manager Brian Cashman and Tampa Bay GM Erik Neander both said they had conversations with other clubs throughout the day but couldn't find a match.

Both teams are counting on a September bump from getting healthy. The Yankees have eight players on the injured list, including lineup fixtures Aaron Judge, Giancarlo Stanton and Gleyber Torres. Tampa Bay has 12 players on the IL, including 10 pitchers.

Cashman said the Yankees chiefly pursued pitching but will instead rely on what's in-house. That includes 21-year-old Deivi García, who pitched six electric innings against the Mets on Sunday in his major league debut. Asked if García could handle a rotation spot during a pennant chase, Cashman smiled and said only: “stay tuned.”

Venezuelan right-hander Miguel Yajure made his major league debut for the Yankees and pitched three scoreless innings. He's the first player to appear in a game wearing No. 89, the last number between 0-99 that hadn't been worn in the big leagues.

Rays: 3B Yandy Díaz was pulled with left hamstring tightness in the fifth and is day to day. ... OF Austin Meadows was held out of the lineup for the second straight day with side soreness. Manager Kevin Cash said Meadows might be available to pinch hit and shouldn’t miss an extended period. ... RHP Charlie Morton (right shoulder inflammation) will come off the injured list and start Wednesday against the Yankees. ... LHP Cody Reed was activated after being acquired from Cincinnati on Friday. LHP Anthony Banda was designated for assignment and traded to the Giants for cash.

Yankees: C Gary Sánchez was hit in the right hand by a foul ball in the fifth inning but stayed in the game. ... OF Aaron Hicks was available a day after leaving a game with calf cramps but wasn't in the starting lineup. He pinch hit in the ninth. ... LHP Zack Britton (strained left hamstring) threw a bullpen Sunday and is expected to return in the next few days. ... C Kyle Higashioka (right oblique strain) could be activated Tuesday.

Yankees RHP Masahiro Tanaka (0-1, 3.48 ERA) will start on extended five days' rest. The Rays were waiting to see how Monday’s game played out before announcing a starter for Tuesday but figure to use an opener.