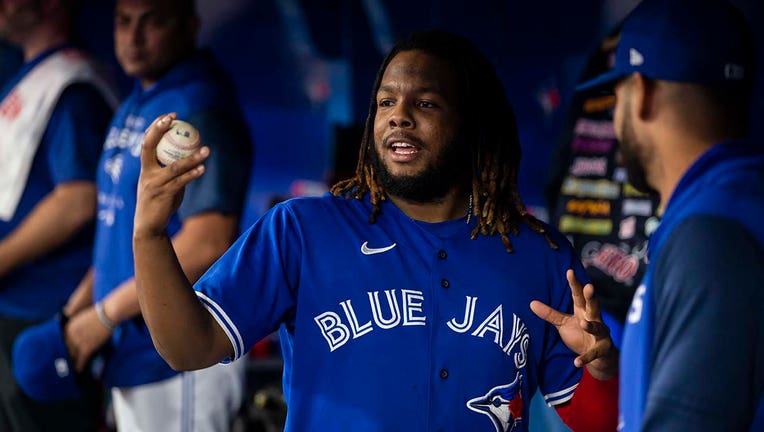 TORONTO, ON - SEPTEMBER 14: Vladimir Guerrero Jr. #27 of the Toronto Blue Jays plays with the ball he hit for his 100th career home run, in the dugout during their MLB game against the Tampa Bay Rays at Rogers Centre on September 14, 2022 in Toronto,

Toronto (81-62) has won three of four from the Rays (79-63), who dropped one game behind Seattle (80-82) heading into Thursday's series finale, Those teams are in the three AL wild-card positions for the expanded playoffs, with Baltimore (75-67) four games behind the Rays.

Guerrero homered off Drew Rasmussen in the first inning, his 28th home run this season. At 23 years, 182 days, he became the youngest Blue Jays player to reach 100 homers, a mark that had been held by Carlos Delgado at 26 years, 84 days.

Ross Stripling (8-4) allowed one run and three hits in 6 1/3 innings, struck out four and walked one to win for the third time in five starts. He won for the first time in nine career appearances against the Rays.

Adam Cimber replaced Stripling and gave up a one-out single to Manuel Margot. Christian Bethancourt followed with a potential double-play grounder but second baseman Santiago Espinal lost track of outs and threw to first. Isaac Paredes walked but Cimber got pinch-hitter Jonathan Aranda to ground into a forceout.

Yimi Garcia gave up back-to-back singles to begin the eighth, then struck out Randy Arozarena, Harold Ramirez, and Ji-Man Choi.

Guerrero and Bo Bichette each drove in a run in the third as Toronto pushed its lead to 3-0, and Espinal singled home Danny Jansen’s double in the fourth.

Rasmussen (10-5) allowed four runs and six hits in four innings, snapping a six-start unbeaten streak that dated to Aug. 2 against the Blue Jays.

Jansen hit a two-out double off left-hander Josh Fleming in the sixth and scored on Raimel Tapia’s hit to make it 5-0.

Ramirez hit a leadoff homer in the seventh.

Tampa Bay put 2B Brandon Lowe (back) on the 10-day IL and recalled C Rene Pinto from Triple-A Durham. Lowe left the team Tuesday and returned to Florida for an MRI, which manager Kevin Cash said revealed inflammation similar to the injury that caused Lowe to miss 55 games earlier thus season. The Rays hope Lowe will play again this season. Lowe was activated last week after missing eight games because of a sore right elbow and went 0 for 13 in four games.

Rays: RHP Ryan Thompson was diagnosed with a stress reaction in his right elbow after feeling discomfort while throwing and will miss the rest of the season, the team said. … LHP Brendan McKay had Tommy John surgery on his left elbow Wednesday.

Rays LHP Shane McClanahan (11-5, 2.20 ERA) is expected to be activated off the injured list to start Thursday’ against Blue Jays RHP Kevin Gausman (12-9, 3.31 ERA). McClanahan (left shoulder) last pitched Aug. 24 against the Los Angeles Angels. Gausman is 1-1 with a 1.59 ERA in three starts against the Rays this season.