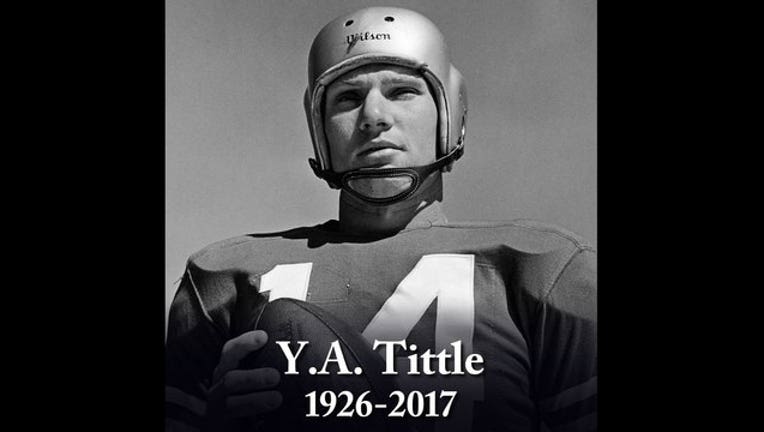 Y.A. Tittle, the Hall of Fame quarterback and 1963 NFL Most Valuable Player, has died. He was 90.

His family confirmed to LSU, where Tittle starred in college, that he passed away. No details were immediately provided.

Known as "The Bald Eagle" as much for his sturdy leadership as his prematurely receding hairline, Tittle played 17 seasons of pro football. He began with the All-America Football Conference's Baltimore Colts in 1948 and finished with the NFL's New York Giants. He played 10 years in between with the San Francisco 49ers, but had his greatest success in New York, leading the Giants to three division titles in four years in a remarkable late-career surge.

Tittle never won a championship, but came to personify the competitive spirit of football, thanks to an iconic photo taken by Dozier Mobley during Tittle's final season in 1964.

The frame caught the then-37-year-old quarterback, who looked older than his years, after throwing an interception returned for a touchdown by Pittsburgh's Chuck Hinton. Tittle is seen kneeling in exhaustion and pain from an injured rib, blood dripping down his face from a head gash.

Tittle, also called "YAT" by his teammates, was elected to the Pro Football Hall of Fame in 1971. He threw 36 touchdown passes while winning the MVP award in '63, and held the NFL record for most TD passes in a season until Dan Marino threw 48 in 1984.

Tittle passed for 33,070 yards and 242 touchdowns in two leagues during his career, including 13 300-yard passing games in an age when the running game dominated the sport. Tittle was the only quarterback of his generation to throw at least 30 touchdown passes in back-to-back seasons when he did it with the Giants.

Born Yelberton Abraham Tittle in Marshall, Texas, on Oct. 24, 1926, he led LSU to the Cotton Bowl before he was drafted by the NFL's Detroit Lions in 1948. He joined Baltimore of the AAFC instead, sticking with the Colts when they joined the NFL in 1950 until they temporarily disbanded the following year, when he was redrafted by San Francisco, another former AAFC club.

Tittle then started 78 games and earned four of his seven Pro Bowl selections during a decade with the 49ers. He even became the first pro football player to be featured on the cover of Sports Illustrated in 1954.

For three seasons, he was part of the 49ers' "Million Dollar Backfield" with Hugh McElhenny, Joe "The Jet" Perry and John Henry Johnson - the only full backfield in NFL history with every member in the Hall of Fame.

The group was broken up in 1957, and Tittle lost his job to John Brodie for most of his final three seasons with San Francisco. Tittle still teamed up with receiver R.C. Owens to create another piece of football history with the "alley-oop" pass - a high-arching downfield throw with Owens' exploiting his superior jumping ability against smaller defensive backs.

Tittle's career appeared nearly finished when San Francisco traded him to New York, but the quarterback was an improbable hit in the Big Apple. He became the Giants' starter in 1961, winning over fans and teammates who had favored 40-year-old Charlie Conerly.

Tittle became one of the NFL's most dependable passers, and New York reached the league's title game from 1961-63, but lost each time, leaving Tittle agonizingly short of his only remaining goal. The Giants plummeted to 2-10-2 in 1964, and Tittle retired after one of his worst pro seasons.

Tittle established Y.A. Tittle & Associates Insurance Services during his playing days, and he ran the business in Palo Alto, California, well past the standard retirement age. He appeared briefly in the 1999 movie "Any Given Sunday," playing a coach, and was a favorite presence at memorabilia shows and NFL alumni functions.