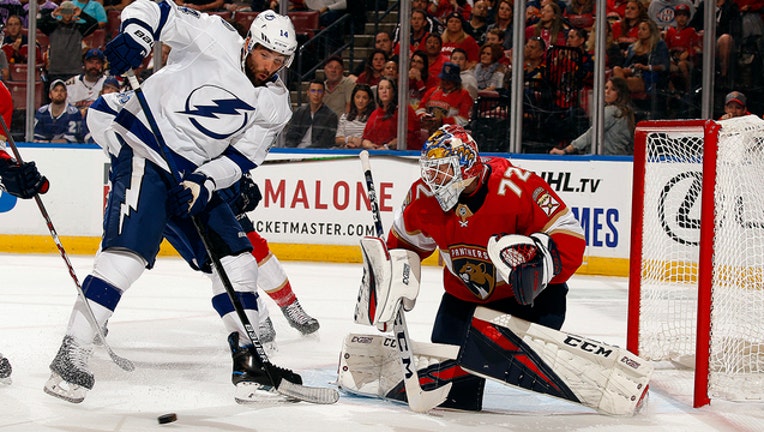 SUNRISE, Fla. - Mike Hoffman recorded his second career hat trick to lift the Florida Panthers to a 4-3 win over the Tampa Bay Lightning on Saturday night.

Noel Acciari also scored a goal and Sergei Bobrovsky made 29 saves for his first win as a member of the Panthers, who broke a seven-game losing streak to the Lightning.

Jonathan Huberdeau and Keith Yandle each had assists on both of Hoffman's first two goals.

Hoffman third goal came when he redirected a shot from Aaron Ekblad into the net 17 seconds into the third period to give the Panthers a 4-1 lead. Hoffman's last hat trick was on Nov, 29, 2016 against Buffalo.

The Lightning made a surge in the third period.

Stamkos closed the Lightning to 4-2 on a one-timer from the left circle that beat Bobrovsky at 6:40 of the third. Joseph made the score 4-3 on his goal with 4:19 left in the third.

The Panthers scored three goals in the second period, including two power-play goals by Hoffman.

The Panthers stretched their lead to 3-0 on Acciari's goal, his first with the Panthers. Acciari corralled the puck in front of the crease and backhanded it in at 12:32.

Trailing 3-0, the Lightning closed to 3-1 on the goal by Smith, who nudged in a puck sliding loose in the crease at 16:23 of the second.

Notes: Panthers defenseman MacKenzie Weegar returned after leaving Thursday's game midway through the third period with an upper-body injury. ... The game was the first of a six-game road trip for the Lightning.