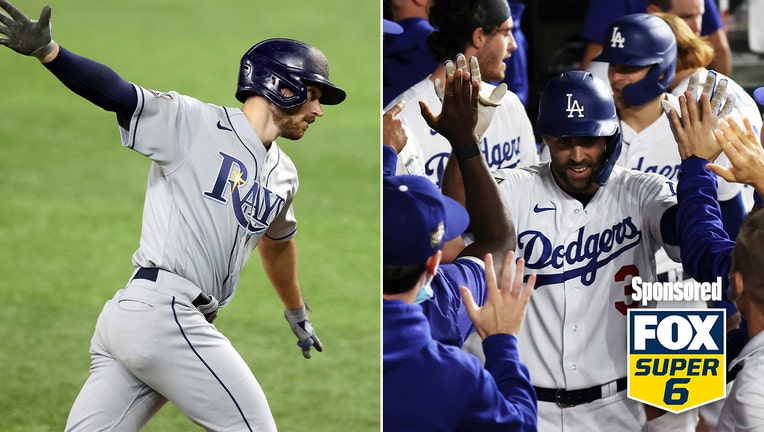 LEFT: Brandon Lowe #8 of the Tampa Bay Rays rounds the bases after hitting a two run home run against the Los Angeles Dodgers during the fifth inning in Game Two of the 2020 MLB World Series at Globe Life Field on October 21, 2020 in Arlington, Texas

The MLB World Series has turned into a Best of Five series for a World Championship. And now, after the Tampa Bay Rays evened the series against the Los Angeles Dodgers in Game 2, the pressure starts to get ramped up for Game 3, which will take place Friday night at Globe Life Park in Arlington, TX. The first pitch is scheduled for 8 p.m. EDT on FOX.

With the FOX Super 6, you could win up to $25,000 by correctly answering six questions about the game. Just download the FOX Super 6 app on your phone and mobile device, make your picks before first pitch and watch the action.

Here are some of the questions that you could win on FOX Super 6 for Game 3 Friday night.

What is the total of hits, runs and RBIs for Cody Bellinger?
The answers range from zero to five plus for the Dodgers outfielder, who has one hit through the first two games of the series – a two-run homer in Game 1. If the Dodgers are going to get anything going against Rays starter Charlie Morton, they need Bellinger to get going.

How many total runs will be scored in the game?
The choices range from 1-6 runs, 7 runs, 8 runs, 9 runs, 10 runs and 11+ runs. The offenses combined for 11 runs on Tuesday night and 10 runs on Wednesday evening. However, with Morton and Dodgers starter Walker Buehler on the mound in Game 3, offense may be tougher to get going.

How many total strikeouts will Walker Buehler and Charlie Morton strike out combined?
The options are less than seven, 7-8, 9-10, 11-12, 13-14 and 15+ strikeouts. Both guys can force hitters to swing off their heels and over pitches. Expect a double figure combined total for the way that these two teams attack the baseball – and often miss.

What will be the highest scoring inning?
The options are a combined 1st and 2nd inning, 3rd, 4th, 5th, 6th or 7th and 8th or after. The middle innings in this series has been prime run scoring opportunities in this series. In Game 2, the two teams combined for eight runs in the 4th through 6th innings. It is worth taking a look and making a choice there.

How many total pitchers will pitch during the game?
The totals are 7 or fewer, 8-9, 10, 11, 12 and 13+. Given the way that Kevin Cash and Dave Roberts use their bullpens, you would be on the right track going with a high number. However, Morton and Buehler give the best chance in the series for the 7 or fewer number to come in.

Choose team to win and by how many runs?
Tampa Bay answered in what effectively was a must-win game in Game 2. Now, the Dodgers will send their best pitcher to the mound looking to go up 2-1 with another shot of Clayton Kershaw and Buehler left should the series go the distance. Tampa Bay can build momentum in this one and put the Dodgers on the spot.