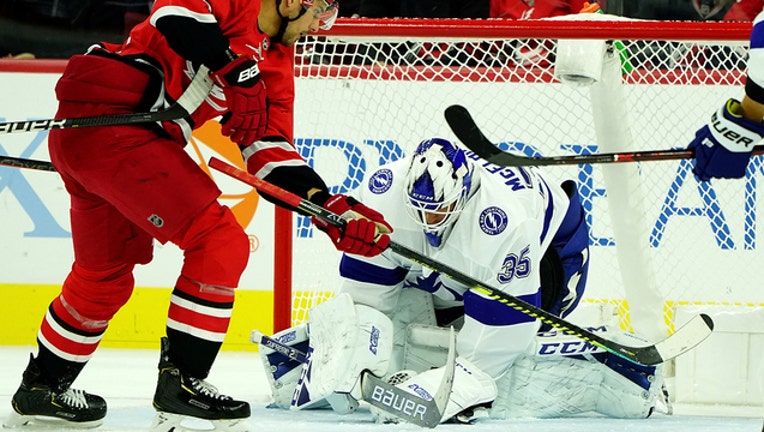 RALEIGH, N.C. - Jaccob Slavin scored at 1:53 of overtime to give the Carolina Hurricanes a 4-3 victory over the Tampa Bay Lightning on Sunday night.

The Hurricanes improved to 3-0, overcoming third-period deficits and winning after regulation in each. Carolina won its opener over Montreal in a shootout on Thursday night, then beat Washington in overtime on Saturday night.

Dougie Hamilton, Brett Pesce and Erik Haula also scored for Carolina, and the Hurricanes held the Lightning to just two shots in the final two periods. Petr Mrazek made 10 saves for Carolina.

Hamilton tied it on a power play with 7:12 left in the third period.

Haula's power-play goal, off Hamilton rebound, cut it to 3-2 with 6:11 left in the second.

Notes: McElhinney, who helped the Hurricanes reach the Eastern Conference final last season, signed a free-agent deal with the Lightning in the offseason. ... Haula, acquired by Carolina from Vegas in a draft-day trade, has scored in each of his first three games with the Hurricanes. ... The Lightning swept the Hurricanes last season and had gone 19-4 against their former Southeast Division rivals since the start of the 2012-13 season. ... Tampa Bay didn't have a shot on goal in the second period. It was the fourth time in franchise history the Lightning have gone a full period without a shot on goal. It was the first the Hurricanes had not allowed a shot in a period since the 2003-04 season. ... Johnson has 21 points (13 goals, 8 assists) in 21 career games against the Hurricanes. ... Former Carolina captain Justin Williams watched the game in a luxury suite with North Carolina Gov. Roy Cooper.

Hurricanes: At Florida on Tuesday night.

Lightning: At Toronto on Thursday night.