TAMPA, Fla. - It's taking some time for the "Awe of Brady" to wear off with Scotty Miller. After all, Brady is as old as Miller's dad. Miller was just 3 when Brady arrived for his first training camp with the Patriots.

"It's still a little crazy,” said Miller. "I was such a big fan of him, big fan of the Patriots. I would have never thought I'd be in this position."

"He's just a normal dude. Just another guy. That's how he acts. He's a cool guy."

Miller is settling down in year two as an NFL receiver. He admits his head was spinning as a rookie.

"Get in the huddle and so much is going though my brain,” said Miller of his rookie season. "Trying to figure where I go. Where I line up. Who am I hot off of. So much going through my head. I couldn't just be me."

"So this year I get in the huddle. It's easy for me to understand where I go, my assignment. Then I'm free to be myself and just make plays out there." 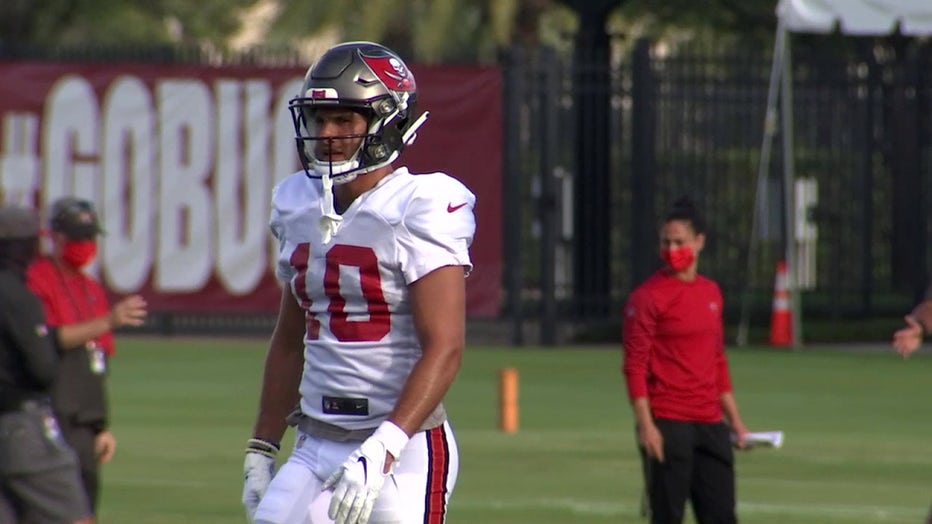 The Buccaneers are giving Miller the shot to be the third wideout behind Mike Evans and Chris Godwin, and so far, the Bucs’ fastest wide receiver is making big plays.

"I'm living a dream,” Miller continued. "As a kid, this is all you could have ever asked for. Honestly, this is what I expect from myself. I expect to be great."

With the Patriots, Julian Edelman was Brady's go-to guy. Here in Tampa, Brady now has two Pro Bowlers to throw to, with Mike Evans and Chris Godwin, but could Miller develop into an Edelman-type player for Brady?

"Yes and no,” said Bruce Arians. "Julian is pretty much a 'slot guy'. We don't just put guys in one position. Chris Godwin normally plays in there and we're not taking those catches away from him."

The biggest challenge for Miller is weight. He's bulked up from playing in the 160's as a rookie to now 175 lbs. It's a daily effort. Just like his commitment to becoming Brady's deep-threat guy.