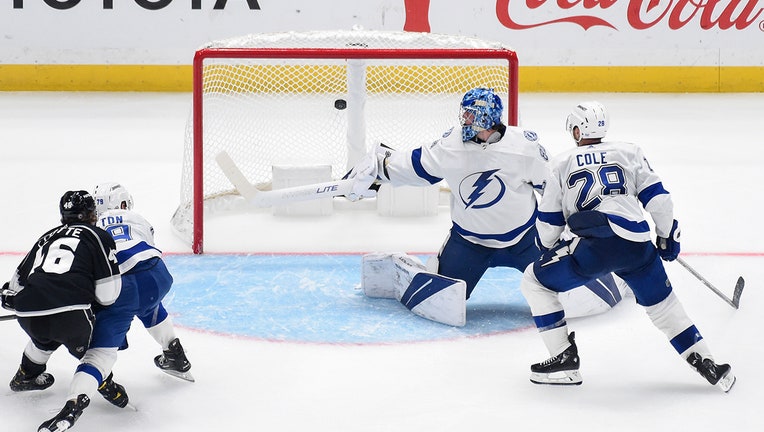 LOS ANGELES, CA - OCTOBER 25: Blake Lizotte #46 of the Los Angeles Kings shoots and scores a goal during the second period against the Tampa Bay Lightning at Crypto.com Arena on October 25, 2022 in Los Angeles, California. (Photo by Juan Ocampo/NHLI

LOS ANGELES - Gabe Vilardi had a goal and an assist, Phillip Danault scored for the second straight game and the Los Angeles Kings defeated the Tampa Bay Lightning 4-2 on Tuesday night.

Blake Lizotte and Adrian Kempe both had a goal, Jonathan Quick made 24 saves and the Kings snapped a 10-game losing streak to the Lightning.

"Yeah, they’re a good team. They’ve been to the Cup final, whatever it is, three years in a row now," Vilardi said. "But like I said, I think we’re a good team, too, so we have to beat teams like this, especially on home ice."

"We had some open looks, and we can’t give those up," Lightning defenseman Victor Hedman said. "We had our chances, too. It was one of those nights that didn’t go our way, so get back to work tomorrow."

The Kings struck twice in the second period, reclaiming the lead on Vilardi’s power-play goal at 5:03 when he tipped Drew Doughty’s slap shot.

"He’s got a lot of confidence off the power play right now," Kings coach Todd McLellan said. "I think as he leaves the rink every day, he’s really enjoying the game. And he’s earned it."

Lizotte made it 3-1 when he scored off Brandt Clarke’s no-look pass with 6:43 left.

"I knew that I had a lot of time and space in the middle of the ice. Make something happen, and that’s what happened," Clarke said.

It appeared Hedman halved Tampa Bay’s deficit 49 seconds later, but the goal was waved off after a challenge by the Kings showed Corey Perry was offside.

Kempe scored his fifth of the season with 5:30 left in the third for a 4-1 lead, keeping pace with Vilardi for the team lead.

Kucherov cut it to 4-2 with 2:16 to play and Vasilevskiy on the bench for an extra skater.

Hagel scored for the second consecutive game with 4:46 left in the first period, alertly corralling the puck after Quick tried to knock away Steven Stamkos’ centering pass. Hagel converted a backhand to cancel out Danault’s opening goal at 7:20.

"There’s no need to stress out. Everyone believes in this room that we’ll turn it around. There’s some adversity throughout the year, and it just happened to be at the start of the year for us," Hagel said.

The Kings had lost 10 straight games to the Lightning dating to Jan. 16, 2017, which was the second-longest active streak in the NHL behind Arizona’s 19 consecutive defeats against Boston.

That skid included losing five straight on home ice in the series, and Vasilevskiy had defeated Los Angeles in seven straight starts.

"I wasn’t here for all 10, so I just know we’ve had a tough time with them since I’ve been here," McLellan said.

Tampa Bay was 0 for 4 on the power play, failing to convert with a two-man advantage for 40 seconds early in the third.

"Well, you’re pretty much going to grade things on if you score or not. You get a 5-on-3 for an extended amount of time and do nothing with it, it doesn’t help your chance of winning," Lightning coach Jon Cooper said.

Los Angeles was 1 for 4 with the man advantage.

NOTES: Kings F Viktor Arvidsson (illness) was a late scratch after participating in warmups. Jaret Anderson-Dolan replaced him in the lineup, making his season debut. … The Lightning played with 11 forwards and seven defensemen.