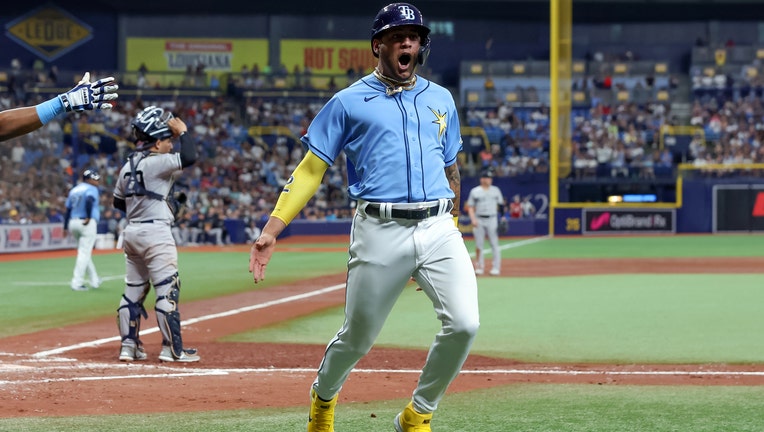 ST. PETERSBURG, FL - SEPTEMBER 3: Jose Siri #22 of the Tampa Bay Rays celebrates scoring against the New York Yankees during the third inning of a baseball game at Tropicana Field on September 3, 2022 in St. Petersburg, Florida. (Photo by Mike Carlso

""We're not where we want to be," Stanton said. "But we're still in a fine opportunity, so it's ours for the taking."

The first-place Yankees, who have seen their 15 1/2-game advantage slip away, have lost six of seven. Tampa Bay blanked them on five hits in the series opener Friday night, a 9-0 loss that Boone called "embarrassing."

"We have the people to do it," Boone said about a turnaround. "If we don’t dig ourselves out, you’ll have a great story to write. We’ll going to find out what we’re made of. All the noise, a lot of people out there really mad. What’s our response."

This was the second of six games between the teams in a 10-day stretch. Yandy Diaz hit a two-run single in the third inning and the Rays made it stand up.

"We’re No. 1 in the league in scoring, amazingly as that is," Boone said. "So, if we don’t turn this around, that will be the story."

Judge boosted his major league homer lead with a leadoff drive in the ninth inning off Jason Adam. But Adam retired the next three batters for his eighth save.

The blast kept the Yankees from being shut out for the 13th time this season, and seventh over the last 26 games.

Kluber (10-7) struck out four without a walk as the Rays improved their AL-best record since Aug. 3 to 20-9. It was the first time the 36-year-old has thrown a pitch in the seventh inning since his no-hitter for the Yankees on May 19, 2021, at Texas.

"We haven't really gotten too far ahead of ourselves at this point," Kluber said. "I think we'll do our best to continue to be that way."

Peter Fairbanks had a perfect eighth before Adam closed.

Kluber retired 14 in a row before Aaron Hicks reached on a throwing error by second baseman Jonathan Aranda in the sixth and went to second on Judge’s single.

Tampa Bay manager Kevin Cash sent pitching coach Kyle Snyder to talk with Kluber but didn’t get anyone up in the bullpen.

Kluber then escaped damage by striking out DJ LeMahieu and getting a grounder from Giancarlo Stanton.

"We needed it," Cash said. "These are big series, big pitches, big moments," Cash said. "You put a lot of pressure on the bullpen. To be able to send him back out there for one extra inning really helps us moving forward."

Díaz put the Rays up 2-0 on a two-run single in the third that deflected off Clarke Schmidt (5-4) and into right field. Francisco Mejia and Jose Siri singled to start the inning, and both moved up on Taylor Walls’ sacrifice bunt.

New York had runners on the corners with one out in the first when Stanton was thrown out trying to move up to second on a pitch in the dirt. The inning ended when Josh Donaldson hit a grounder.

Stanton had his bat demolished when he hit a third-inning grounder off a 90-mph pitch from Kluber.

Yankees prospect Oswald Peraza made his first big league start at shortstop and went 0 for 3. He struck out pinch-hitting during the ninth in his debut Friday.

LF Andrew Benintendi went on the 10-day IL with right wrist inflammation after getting hurt on a swing Friday. Boone said there will be additional tests to narrow down what the injury is.

Yankees: RHP Frankie Montas (4-11) will make his sixth start Sunday since being acquired from Oakland. He is 0-2 with a 7.01 ERA in his first outings.