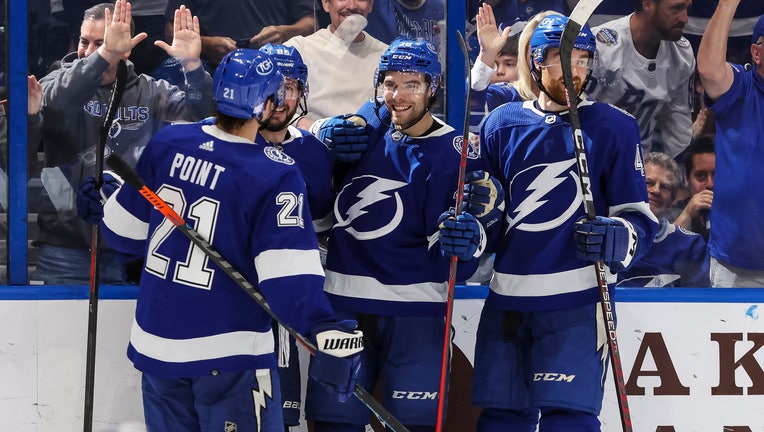 TAMPA, FL - NOVEMBER 5: Brandon Hagel #38 of the Tampa Bay Lightning celebrates a goal with teammates Nick Perbix #48, Nikita Kucherov #86, and Brayden Point #21 against the Buffalo Sabres during the third period at Amalie Arena on November 5, 2022 i

Perbix, in his ninth career game, made it 4-3 on his shot from above the right circle off a pass from Kucherov with 4:55 to play. Kucherov extended his goal streak to six games with 58 seconds remaining.

"I think Kuch has been phenomenal this year," Lightning coach Jon Cooper said. "He scored big goals for us, he's checking, he's doing everything we need him to do. I just think his growth over the years has been amazing. He keeps taking steps every year. The one thing about Kuch, he demands a ton from himself."

Eric Comrie made 26 saves, and Zemgus Girgensons Casey Mittelstadt and Jeff Skinner scored for the Sabres, who were coming off a 5-3 loss at Carolina on Friday night. Defenseman Rasmus Dahlin was scratched due to an upper-body injury and is day to day.

"We lost that because of a difference in experience, not skill," Sabres coach Don Granato said. "That was evident tonight. The effort was great."

Hagel pulled the Lightning even at 3 on his own rebound in the low slot at 7:20 of the third. He also had two assists.

Skinner gave Buffalo a 3-2 lead when he circled around Elliott in the low crease and scored off a cross-ice pass from Alex Tuch at 4:05 of the third.

"Obviously, we didn't get the result, but there's a lot of good things you want to build on because there are good things we can take from it," Skinner said.

Point put the Lightning up 2-1 with a power-play goal 5:05 into the second.

Mittelstadt got the equalizer at 8:34 of the second with a waist-high stick blade deflection of Owen Power’s power-play shot. Power finished with two assists.

After Paul opened the scoring at 7:07 of the first, Girgensons tied it with 3:36 left in the period.

Cooper said the workload that starting goalie Andrei Vasilevskiy had over the last three seasons that saw Tampa Bay reach the Stanley Cup title round in all of them probably doesn’t have much impact in this season’s goalie rotation.

"Vasy is a 60-game guy," Cooper said. "I think this year because it’s actually kind of a normal year, so the games are spread out more. Some of those COVID years it was like game, game, game, game. The one thing about Vasy is, you never have to worry about him. He just keeps himself in just impeccable shape."

Kucherov had seven shots on goal and finished plus-4. His career-high goal streak is eight, coming in 2021-22 ... Skinner also had seven shots. ... Stamkos has gone seven games without a goal after being seven during a season-opening five-game streak. ... Elliott is 19-4-2 against Buffalo. He tied Gilles Meloche for 52nd all-time with 270 wins,