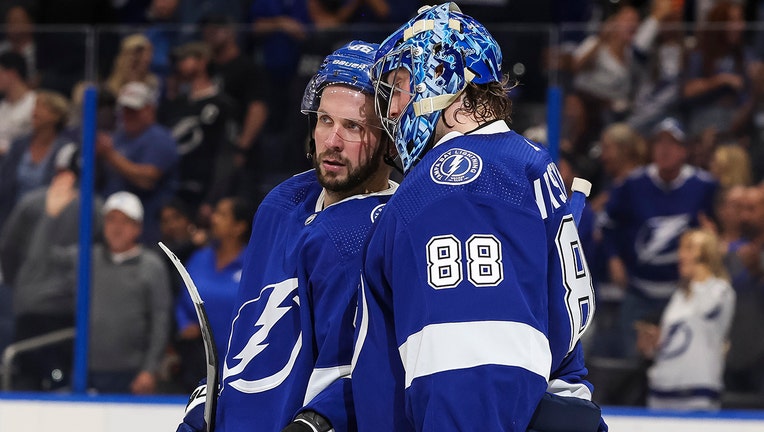 Goalie Andrei Vasilevskiy #88 and Nikita Kucherov #86 of the Tampa Bay Lightning celebrate the win against the Ottawa Senators at Amalie Arena on November 1, 2022 in Tampa, Florida. (Photo by Mike Carlson/NHLI via Getty Images)

TAMPA, Fla. - Nikita Kucherov had a goal and two assists, and the Tampa Bay Lightning rallied to beat the Ottawa Senators 4-3 on Tuesday night.

Tampa Bay went ahead to stay when Kucherov scored from the low right circle with 2:30 remaining off a cross-ice pass by Mikhail Sergachev.

Kucherov has a four-game goal streak and an eight-game point streak overall.

Ottawa's Brady Tkachuk had his shot during a breakaway with 1 second to play go just wide.

Sergachev, Alex Killorn and Brayden Point also scored for Tampa Bay, and Andrei Vasilevskiy made 12 saves. The Lightning went 1 for 8 on the power play.

Tampa Bay played without star defenseman Victor Hedman, who is considered day to day after he was scratched an upper-body injury.

After Killorn scored at 11:04 of the third, Ottawa regained the lead at 3-2. Tkachuk stole the puck from Vasilevskiy behind the net and set up Giroux in the slot.

Forsberg made a strong post-to-post save during the opening minute of the second on Steven Stamkos, who raised his stick after taking his left circle power-play shot thinking it would end up in the net.

Joseph, playing his first game against his old team after being traded in March, put the Senators up 2-1 on a breakaway with 7:39 left in the second. Joseph got his first goal of the season with Tampa Bay on a 5-on-3 power play.

The Lightning's two-man advantage was part of a five-minute penalty for a hit on Erik Cernak by Gambrell at 7:27. Cernak went to the locker room but returned later in the period.

Tampa Bay had six shots, and Stamkos hit the post, during the extended power play as the Lightning outshot Ottawa 26-8 through two periods. Stamkos had seven shots in the opening 40 minutes and finished with two assists.

Gambrell, playing in his first game of the season, made it 1-0 on the Senators’ first shot 5:44 into the game.

Vasilevskiy stopped Drake Batherson's shot during a 2-on-none during a second-period power play.

Senators: G Cam Talbot (ribs) went through an extensive on-ice session after the morning skate and is expected to return within a week. "We’re hopeful that over the next two, three games that he can get back," Ottawa coach D.J. Smith said.