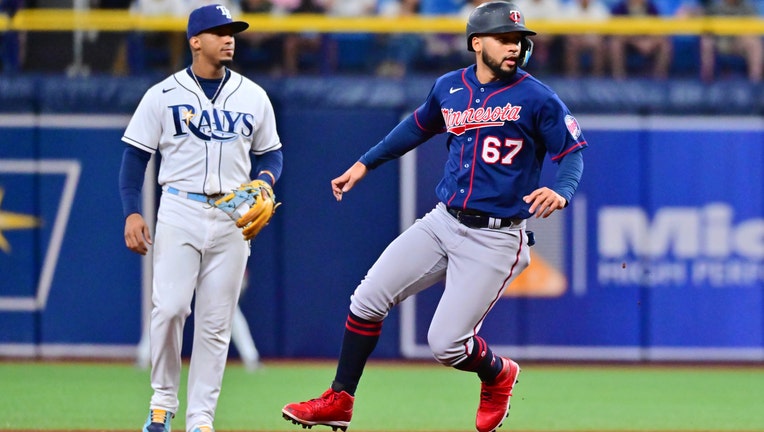 ST PETERSBURG, FLORIDA - APRIL 30: Gilberto Celestino #67 of the Minnesota Twins steals second base from Wander Franco #5 of the Tampa Bay Rays after a wild pitch in the fifth inning at Tropicana Field on April 30, 2022 in St Petersburg, Florida. (Ph

The second homer, Garlick's third of the season, came with Carlos Correa on base in the sixth inning and broke a 1-1 tie.

Correa had three hits for the Twins, who have won eight of nine.

McClanahan (1-2) struck out a career-high 11 in five innings, giving up three runs on four hits, including Garlick's two homers. The left-hander leads the American League with 42 strikeouts.

"You know he’s got potential to strike out a lot of guys," said Garlick, who had the first multi-homer game of his career. "It was nice to be able to put a couple good swings on him, put some runs on the board and then let everybody else kind of take it from there."

"That’s kind of his specialty — hitting left-handed pitching. He did a nice job, got to Shane," Rays manager Kevin Cash said. "I thought Shane was just awesome again today. (There were) two pitches he’d like to have back, and when they leave the ballpark it can be frustrating."

Max Kepler, who took Garlick's spot in the batting order, had two hits, including a two-run homer in the ninth.

Twins starter Chris Archer gave up one run on two hits and three walks while striking out four in four innings.

Taylor Walls hit his first home run in the second inning off Archer, one of four hits for Tampa Bay, which had a three-game winning streak halted.

Twins: CF Byron Buxton, who was hit on the hand by a pitch Friday night, was a late scratch. ... 1B Miguel Sano was back in the lineup for the first time after injuring his knee in a walk-off celebration Tuesday night. ... RHP Bailey Ober (right groin strain) was placed on the 10-day injured list, retroactive to April 29.

Rays: C Francisco Mejia missed his eighth game on the COVID-related IL, but is now symptom-free and through the protocols. The Rays face a decision on whether to bring him on their their West Coast trip.

Another COVID-19 outbreak hit the Rays coaching staff Saturday, taking pitching coach Kyle Snyder, field coordinator Paul Hoover, bench coach Matt Quatraro and bullpen coach Stan Boroski away from the team until further notice. None of them will be on the plane Sunday night when the Rays fly to Oakland for the start of a nine-game trip.

"When something like this snowballs like it did today. ... I mean, we’ve been dealing, dealing, dealing trying to contain it, and then the last day or two it’s hit us pretty hard," Cash said.

"I hope as the weather continues to warm up that we deal with it less and less but I don’t think it’s something that is going to be completely absent as we go on," said Twins manager Rocco Baldelii said of COVID-19. "Obviously there’s a lot going on the other side of the field right now. We would like to avoid what the other team is dealing with. I’ve got a lot of friends on the other side I’d like to spend some time with and give a hug to and all that, but I think they understand. I think everyone understands what we’re up against right now and hopefully it’s just a blip and something that we get past and that they get past too."