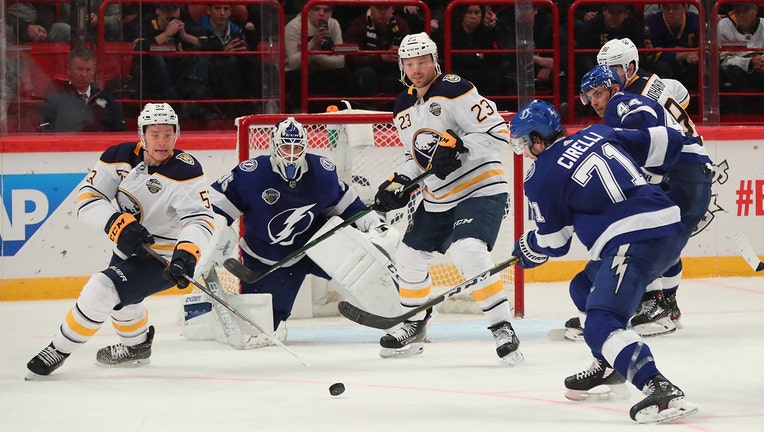 Jeff Skinner #53 and Sam Reinhart #23 of the Buffalo Sabres battle for the puck against Anthony Cirelli #71 of the Tampa Bay Lightning during an NHL Global Series game at Ericsson Globe on November 9, 2019 in Stockholm, Sweden. (Photo by Bill Wippert

STOCKHOLM - Pat Maroon scored twice, and the Tampa Bay Lightning beat the Buffalo Sabres 5-3 on Saturday for a sweep of their two regular-season games in Sweden.

Hedman, who is from Ornskoldsvik, Sweden, converted a power-play slap shot 1:58 into the second period, lifting the Lightning to a 2-1 lead.

Marcus Johansson, another Swede, was in the penalty box when Hedman scored his third goal of the season.

Jack Eichel and Sam Reinhart each had a goal and an assist for Buffalo, which has dropped five in a row. Victor Olofsson also scored in his native country, and Carter Hutton made 35 saves.

The two sold-out games in Stockholm's Ericsson Globe were part of the 2019 NHL Global Series.

Tampa Bay won for the third time in four games overall. Yanni Gourde had a goal and an assist for the Lightning, and Mathieu Joseph also scored.

The Sabres grabbed the lead when Reinhart's wrist shot from the right circle hit the post and bounced off McElhinney's back for a 1-0 lead 9:30 into the first. Reinhart also scored twice in Friday's loss.

But the Lightning responded with three straight goals. Maroon tied it at 1 with a power-play deflection late in the first. After Hedman put Tampa Bay ahead to stay, Maroon scored his third of the season when he jammed home a rebound for a 3-1 lead in the final seconds of the second.

Gourde and Joseph helped put it away when they scored 67 seconds apart midway through the third, lifting the Lightning to a 5-2 advantage. Gourde was successful on a wrist shot, and Joseph knocked in a rebound.

It's the third straight year — and eighth overall — the NHL has played in Europe to try to increase its local following in hockey-mad countries including Sweden, Finland and the Czech Republic.

The NHL is set to return to Europe also next year.

NOTES: It was the 28th NHL regular-season game in Europe. ... Buffalo F Vladimir Sobotka was sidelined after he was hit by Nikita Kucherov in the first period of Friday's game. Coach Ralph Krueger said Sobotka will be evaluated on Monday. ... Buffalo F Casey Mittelstadt played in his 100th NHL game. ... Tampa Bay beat Buffalo for the fifth time in a row.