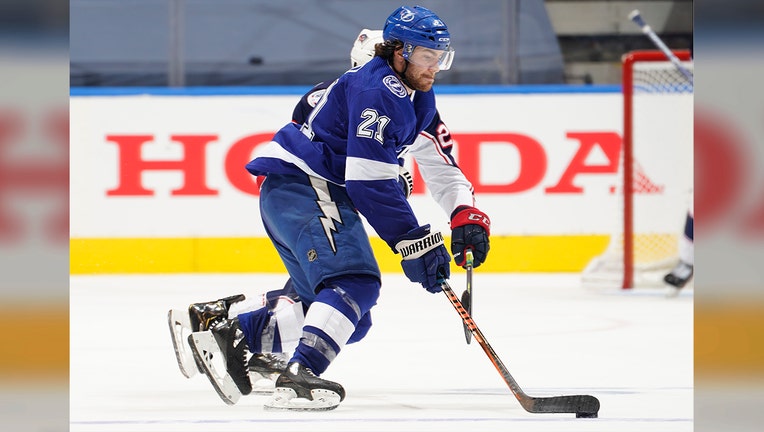 Brayden Point #21 controls the puck against the Columbus Blue Jackets during the fifth overtime of Game One of the Eastern Conference First Round of the 2020 NHL Stanley Cup Playoff at Scotiabank Arena on August 11, 2020 in Toronto, Ontario. (Mark Blinch/NHL / Getty Images)

TORONTO, Canada - Brayden Point scored 10:27 into the fifth overtime, and the Tampa Bay Lightning beat the Columbus Blue Jackets 3-2 on Tuesday in the fourth-longest game in Stanley Cup playoff history.

Point scored from just above the left circle, beating Joonas Korpisalo after the goaltender made an NHL-record 85 saves. Point also scored way back in the first period of Game 1 of the best-of-seven series.

Vezina Trophy finalist Andrei Vasilevskiy also was outstanding for Tampa Bay, making 61 stops. The teams combined for 151 shots — most in a NHL game since the league began officially tracking the statistic in 1955-56.

“It’s tiring for sure but then it gets fun at some point," Point said. “I don’t know how many guys played a game like that, that long. It was an exciting one.”

The teams are meeting in the first round for the second straight year, with the Lightning looking to rebound from being swept 16 months ago by the underdog Blue Jackets, who became the first No. 8 seed to oust the winner of the Presidents' Trophy in four games.

Pierre-Luc Dubois scored on the power play and Oliver Bjorkstrand added a goal late in the second period to give Columbus — the No. 7 seed in the East — a pair of short-lived leads in regulation.

Yanni Gourde had the other goal for the second-seeded Lightning.

While there’s no denying last season’s early exit from the playoffs has been a source of motivation for much of the past 16 months, coach Jon Cooper and the Lightning insist this series is about a lot more than redemption.

After all, both teams have decidedly different looks, with Artemi Panarin, Sergei Bobrovsky and Matt Duchene no longer with Columbus, and Pat Maroon, Kevin Shattenkirk and Blake Coleman bolstering Tampa Bay’s talent-laden roster.

The Lightning played Game 1 without injured captain Steven Stamkos. But Norris Trophy finalist Victor Hedman, who appeared to twist an ankle during last Saturday’s round-robin finale against Philadelphia, skated and had an assist on Tampa Bay’s first goal.

With goaltender Elvis Merzlikins ruled out for the opener, Korpisalo started for Columbus and kept his team close by stopping 26 of 27 shots in the first two periods. The Lightning pulled even at 2-all on Gourde’s goal just 23 seconds into the third, but weren't able to finish it off in regulation despite outshooting the Blue Jackets 41-26 up to that point.

“You just try to go save by save, not thinking too much,” Korpisalo said. “I think I felt pretty good. The boys, they were battling hard in front of me.”

The teams created numerous scoring opportunities in overtime, however Korpisalo and Vasilevskiy remained on top of their games.