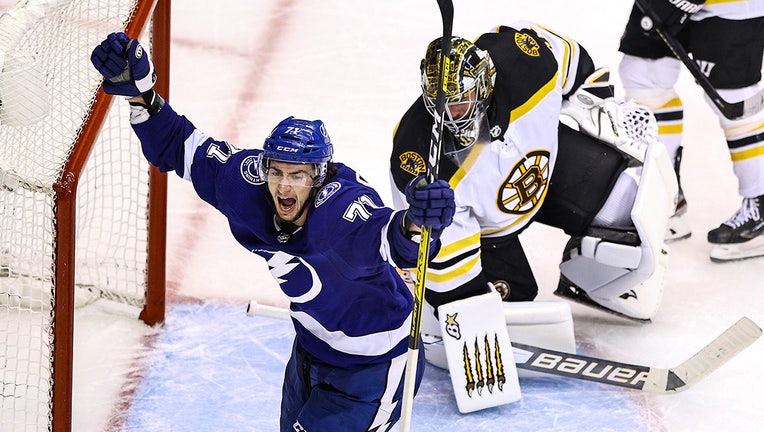 Anthony Cirelli celebrates after scoring a goal past Jaroslav Halak during the third period in Game Five of the Eastern Conference Second Round. (Photo by Elsa/Getty Images)

Tampa Bay coach Jon Cooper calls them guys who have a little bit of dirt under their fingernails. And that tough trio of late-season acquisitions is part of the reason the Lightning are back in the Eastern Conference finals of the Stanley Cup playoffs for the fourth time in six years.

NHL veterans Pat Maroon and Kevin Shattenkirk were brought in, too, to help transform the league’s highest-scoring team into a resilient bunch that realizes playing stingy defense is more important than lighting up the scoreboard in the postseason.

“Often times it’s not how many you score, but it’s what you keep out of the net,” Cooper said Monday night after Victor Hedman's goal with just under six minutes remaining on the clock in the second overtime gave the Lightning a 3-2 victory and ended their second-round playoff series against the Boston Bruins in five games.

Maroon, Shattenkirk, Coleman, Goodrow and Bogosian have made the Lightning much tougher to play against than a year ago, when they won the President’s Trophy only to be swept by the Columbus Blue Jackets in the first round of the playoffs.

“Anybody who’s been part of playoffs (knows) the game is a grind. You need those type of guys who can do that, and we found them,” Cooper added. “It’s clearly really helped us.”

Vasilevskiy, who won the Vezina Trophy as the NHL's top goalie in 2019 and is a finalist again this year, stopped 147 of 157 shots against the Bruins, who had the league’s best record during the regular season.

Offensively, the team has gotten timely scoring up and down the roster, including from Palat, who has five goals in the past four games.

“There’s no doubt we’ve gotten contributions from everybody,” said defenseman Ryan McDonagh, who returned to the lineup Wednesday night after missing three games due to injury.

And, Maroon said, one that has grown since last year’s first-round exit.

“From talking to players from the past years, they didn’t recognize that if you play the right way and do the little things that make yourself — as a team and individual — have success, good results are going to happen,” Maroon added. “We’re all committed, playing smart with the puck.”