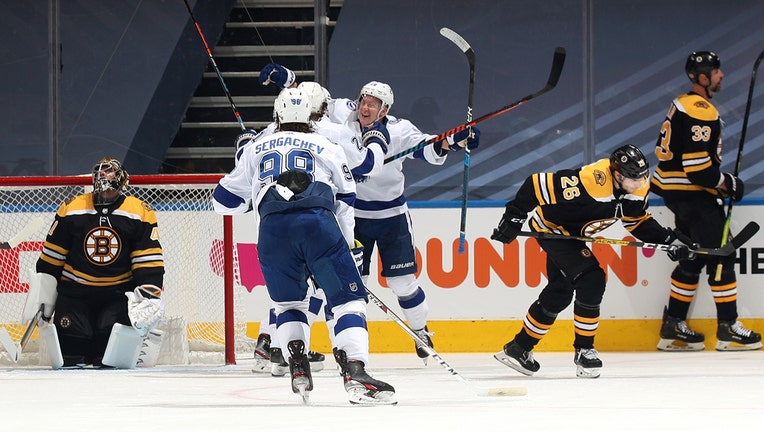 Ondrej Palat celebrates his power play goal with teammates during the first period of Game Three of the Eastern Conference Second Round against the Boston Bruins . (Chase Agnello-Dean/NHLI via Getty Images)

Killorn added a second goal and Yanni Gourde, Brayden Point and Nikita Kucherov also scored for the Lightning, which won for the second straight night to take a 2-1 lead in the best-of-seven matchup between Atlantic Division rivals.

Kucherov assisted on all three power-play goals as the Lightning ended an 0-for-16 drought in man-advantage situations that began in Game 1 of Tampa Bay’s first-round victory over the Columbus Blue Jackets.

Brad Marchand had his fourth goal of the series for Boston, scoring on the power play at 4:56 of the second period.

But by then, the Bruins trailed 3-0 after yielding goals to Palat and Gourde within a 15-second span of the opening period and Sergachev’s blistering shot that sailed past goalie Jaroslav Halak at 2:14 of the second.

Things really got out of hand when Halak, trailing 4-1, was replaced by 23-year-old Dan Vladar, making his NHL playoff debut.

Point scored on a breakaway and Killorn added his second goal the night before Kucherov built the lead to 7-1 at 3:58 of the third period.

Andrei Vasilevskiy had 23 saves for the Lightning. Halak stopped 12 of 16 shots before departing midway through the second period.

Notes: Vlader, who dressed as Halak’s backup the previous five games, allowed three goals on 15 shots. ... Tampa Bay finished 3 for 6 on the power-play and is 5 for 26 for the playoffs. ... Torey Krug and David Pastrnak assisted on Marchand’s goal. ... With injured Lightning defenseman Ryan McDonagh still sidelined, Tampa Bay dressed seven defensemen and 11 forwards for the second straight game.