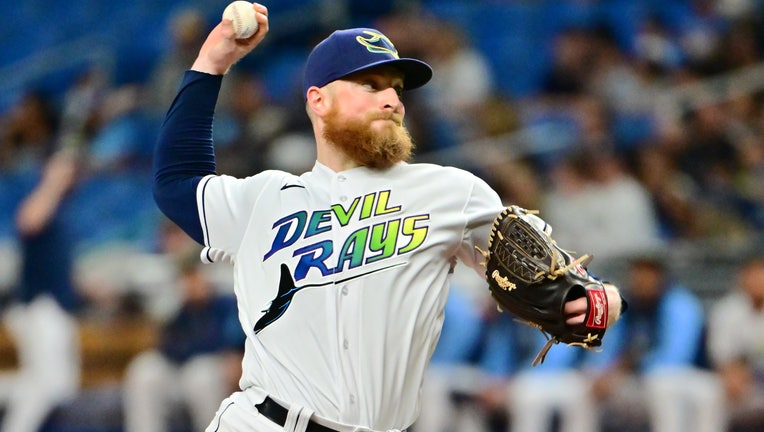 ST. PETERSBURG, Fla. - Toronto interim manager John Schneider is willing to go all in trying to get the top AL wild card and the home playoff series that goes with it.

Manoah pitched seven shutout innings, Merrifield hit a three-run homer and the Blue Jays regained the first wild-card spot with a 3-1 victory over the Tampa Bay Rays on Saturday night.

"Love it, man," Manoah said when asked about pitching in big games. "We've got a great team. Being able to come to battle with these guys, it's what I dreamed of my whole life right here. Being on that mound, I wouldn't want to be anywhere else."

The Blue Jays lead Tampa Bay by one game. The top wild card finisher will host all games in their best-of-three opening-round series, while the other two wild cards play strictly on the road.

Schneider said Thursday he would use Manoah in the final regular-season game if home field was at stake. Hosting in Toronto would mean a great deal after the Blue Jays spent 2020 and part of 2021 playing home games away from home due to the COVID-19 pandemic.

The Rays could also have a real home-field advantage at Tropicana Field, where they are 51-29. Tampa Bay's road mark is 33-39.

"This is an interesting place," Schneider said. "I think guys say that, whether it’s from the roof, the lighting, the turf, the dirt in the infield. Their mound seems high. Their acoustics are weird. It seems like their players embrace it a little bit, and use it as an advantage at times. It’s something you’ve got to work around the best you can."

Manoah (15-7) scattered four hits, walked two and struck out eight while throwing a season-high 113 pitches. The righty worked out of a two-on, one-out jam in the sixth by striking out Randy Arozarena and getting a flyout from David Peralta.

Jordan Romano replaced Tim Mayza with two on and two outs in the eighth and allowed pinch-hitter Harold Ramirez's RBI infield single but avoided further damage by striking out Manuel Margot. Romano finished the game to get his 35th save in 41 chances.

Tampa Bay starter Drew Rasmussen (10-7) gave up one run, three hits and two walks in 6 1/3 innings. He struck out five.

The teams combined for 31 runs, with the Rays accounting for 20, in the first two games of the series that were both won by Tampa Bay.

Arozarena got the Rays' first hit with a two-out double in the fourth. He became the first Tampa Bay player and 20th big leaguer to have 40 doubles, 20 homers and 30 stolen bases in a season.

Teoscar Hernández ended Rasmussen's night with a double in the seventh. Brooks Raley entered and, after a walk to pinch-hitter Danny Jansen, Merrifield made it 3-0 on his 10th homer of the season.

Merrifield homered twice in Thursday night's 10-5 loss to the Rays.

Alejandro Kirk opened the second with a single before Rasmussen retired 12 in a row until Merrifield's leadoff double in the sixth.

Plate umpire Corey Blaser took a hard foul ball by Margot on the mask in the eighth but remained in the game.

The Rays posted a thank you on the message board for CF Kevin Kiermaier, who is out for the season following left hip surgery. Kiermaier is in the final season of a $53.5 million, six-year contract that includes a club option for 2023 that is expected to be declined.

Rays ace Shane McClanahan was voted the Don Zimmer MVP award winner by members of the Tampa Bay chapter of the Baseball Writers’ Association of America. CF Jose Siri was selected as the outstanding rookie. 3B Yandy Díaz received the Paul C. Smith Champions award as the player who best exemplifies the spirit of true professionalism on and off the field.

Rays: 2B Brandon Lowe (lower back) is done for the season.

McClanahan (12-6), pulled from his start Tuesday in the fifth inning due to neck tightness, will face Blue Jays RHP Ross Stripling (8-4) on Sunday.