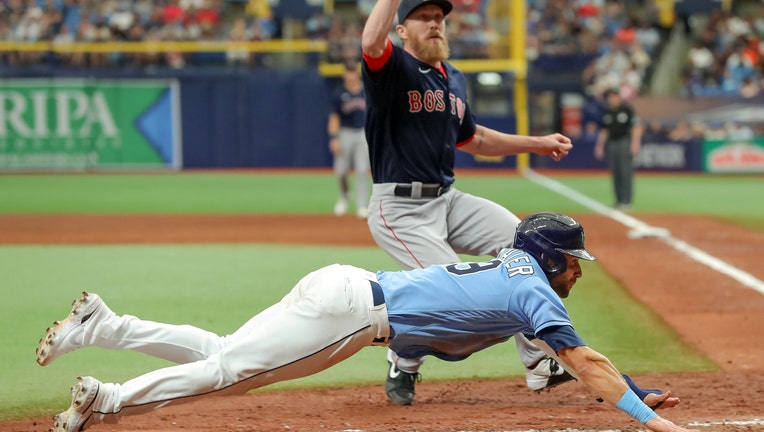 ST. PETERSBURG, FL - APRIL 24: Kevin Kiermaier #39 of the Tampa Bay Rays slides in to score on a wild pitch from Jake Diekman #31 of the Boston Red Sox during the sixth inning in a baseball game at Tropicana Field on April 24, 2022 in St. Petersburg,

ST. PETERSBURG, Fla. - Shane McClanahan became Tampa Bay's first starting pitcher to get a win this season as the Rays overcame a two-run, first-inning deficit and beat the Boston Red Sox 5-2 on Sunday.

Pinch-hitter Ji-Man Choi had a tying, two-run double as the Rays rallied for three runs in the fifth.

McClanahan (1-1) gave up RBI singles to Kiké Hernández and Alex Verdugo in the first, then pitched shutout ball from the second through the sixth. He allowed six hits, struck out seven and walked none.

Colin Poche and Ryan Thompson followed with hitless relief, and Thompson got three outs for his second major league save, his first since Sept 19, 2020. Tampa Bay's previous eight wins this year came from its bullpen.

Phillips Valdez (0-1) followed Hill and took his first big league defeat since 2020. He hit Randy Arozarena with a pitch, walked Wander Franco and then hit Díaz with a pitch, loading the bases with one out.

Choi hit a two-run double off Ryan Bresler, and Manuel Margot had a go-ahead RBI groundout.

Kevin Kiermaier singled off Matt Barnes in the sixth and scored on Diekman's wild pitch.

Red Sox: RHP Tanner Houck will miss his turn in the rotation in the upcoming Toronto series because he is unvaccinated and is not allowed to enter Canada. Houck made his first relief appearance of the season after three starts and retired the Rays' final five batters in order.

Rays: Seattle opens a three-game series at Tropicana Field on Tuesday night, the first of seven games in 13 days against the Mariners.