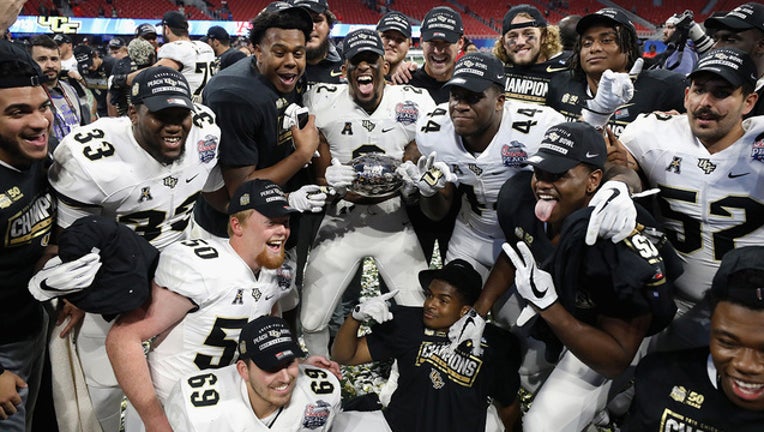 ATLANTA (AP) - McKenzie Milton threw two touchdown passes and ran for 116 yards with another touchdown, leading No. 10 Central Florida to a 34-27 Peach Bowl win over No. 7 Auburn on Monday that capped the Knights' perfect season.

UCF led 34-20 before having to stop a late Auburn comeback. Antwan Collier's interception in the end zone with 24 seconds remaining clinched the win.

After Auburn took a 20-13 lead in the third quarter on a 4-yard run by Kerryon Johnson, Milton threw a 12-yard touchdown pass to Otis Anderson to tie the game. Milton, under pressure, zipped an 8-yard scoring pass to Dredrick Snelson early in the fourth to give the Knights the lead.

Chequan Burkett's 45-yard interception return for a touchdown pushed the lead to 14 points.

UCF (13-0) won in its final game with coach Scott Frost, who stayed with the team through the bowl game after accepting an offer to become the new coach at Nebraska, his alma mater.

The Knights thought they deserved a higher ranking after winning the American Athletic Conference and leading the nation in scoring, and they made a strong statement by beating Auburn (10-4).

Auburn suffered its second straight loss at Mercedes-Benz Stadium, where it was beaten by Georgia in the Southeastern Conference championship game one month ago. The loss to Georgia cost the Tigers a chance to play in the College Football Playoff.

Kerryon Johnson ran for 71 yards, including a 4-yard touchdown run that gave Auburn the lead in the third quarter.

UCF led 13-6 at halftime despite behind held under 14 points at the break for the first time this season.

With 6:58 remaining, Auburn's Derrick Brown blocked a 25-yard field goal by Matthew Wright that would have given UCF a 10-point lead. Auburn couldn't take advantage of the opportunity to tie the game.

After the interception return by Burkett gave UCF a 34-20 lead, Auburn's Eli Stove had a 7-yard scoring run with about four minutes remaining. By that time, many Auburn fans in the sellout crowd of 71,109 already had left the stadium.

With 2:18 remaining, UCF's Matthew Wright missed a 38-yard field goal, giving the Tigers an opening for their last-gasp drive, which ended with the interception.

The Knights, who lead the nation with 49.4 points per game, continued their streak of scoring more than 30 points in every game this season.

UCF: The Knights passed every test, including on the line of scrimmage, as they proved they could match speed and strength with the Tigers. Milton overcame a slow start after completing only 3 of 17 passes for 30 yards in the first half. He completed 16 of 35 passes for 242 yards with two touchdowns and no interceptions.

Auburn: The Tigers couldn't maintain momentum after opening the second half with two touchdowns for a 20-13 lead. Auburn insisted motivation would not be a problem after the crushing loss in the SEC championship game, but the Tigers had no answer when the Knights regained momentum. Stidham completed 28 of 43 passes for 331 yards with one touchdown and two interceptions.

UCF: The Knights will begin a new era with coach Josh Heupel, the former Missouri offensive coordinator. Their opening game has not been set, but they will play at North Carolina on Sept. 15.

Auburn: The Tigers will return for their third straight game at Mercedes-Benz Stadium when they play Washington on Sept. 1 to open the 2018 season.