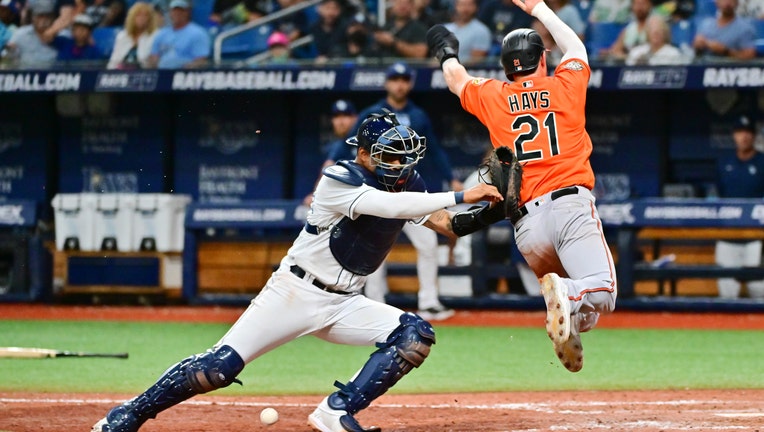 ST PETERSBURG, FLORIDA - JULY 16: Christian Bethancourt #14 of the Tampa Bay Rays drops the ball before making the tag on Austin Hays #21 of the Baltimore Orioles in the tenth inning at Tropicana Field on July 16, 2022 in St Petersburg, Florida. (Pho

Rutschman had his first pinch-hit homer and added a 10th-inning sacrifice fly for the Orioles, whose 10-game winning streak ended Friday night in a 5-4 loss to the Rays.

Baltimore had lost its previous 10 games at Tropicana Field.

Automatic runner Rougned Odor was thrown out after getting caught between second and third with no outs in the 11th when Jorge Mateo squared around to bunt but didn't. But Mateo then tripled off Luke Bard (1-1), Cedric Mullins walked and stole second, and Mountcastle flared a single to right field.

Jorge López (4-5) gave up one run over two innings. Joey Krehbiel replaced Cionel Pérez with two on and two outs in the 11th and retired Luke Raley on a flyball to get his first save.

Rutschman hit a sacrifice fly in the 10th but the Rays tied it when Ji-Man Choi had an RBI single.

The Rays went 1 for 11 with runners in scoring position through nine innings, and had Randy Arozarena thrown out trying to take third on a double-steal attempt with two on and one out in the 8th.

Rutschman got Baltimore even at 3 on his drive off Jason Adam leading off the eighth.

Tampa Bay slugger Brandon Lowe returned after being out since May 16 due to a lower-back injury and went 2 for 4 with a walk and two runs scored.

Lowe reached on a bunt single in the first and had a third-inning single, and scored both times on Dean Kremer wild pittampaches with Arozarena at the plate and two outs. Arozarena homered in the third to put the Rays up 3-1.

Anthony Santander had a double in the Orioles second and scored when center fielder Josh Lowe failed to catch Ramón Urías’ double as he appeared to be distracted by Arozarena running towards him from left field.

Baltimore got within 3-2 in the fifth on Tyler Nevin’s single off Ryan Yarbrough.

Rays: CF Kevin Kiermaier (left hip) said that he may not return this season from a left hip injury and will see a specialist after the All-Star break. … RHP Shane Baz (right elbow sprain) was also moved to the 60-day IL. The starter has been on the IL since July 13.

Orioles RHP Jordan Lyles (6-7) and Tampa Bay RHP Corey Kluber (5-5) are Sunday’s starters. Lyles has thrown 100 or more pitches in each of his last four starts.