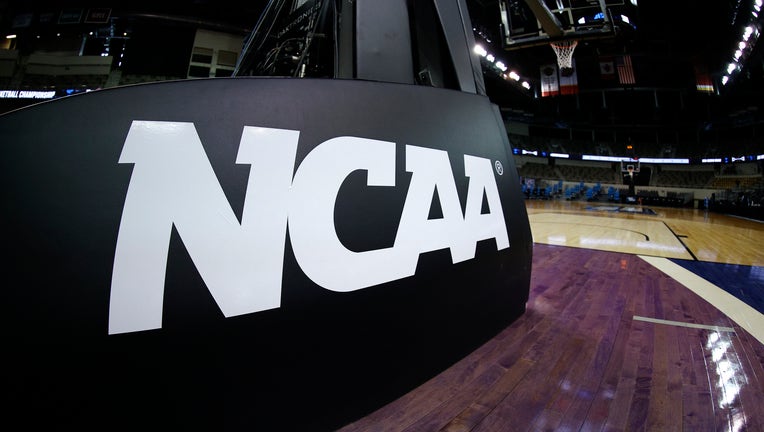 The NCAA logo is seen on the basket stanchion before the game between the Oral Roberts Golden Eagles and the Florida Gators in the second round game of the 2021 NCAA Men's Basketball Tournament at Indiana Farmers Coliseum on March 21, 2021 in Indiana

DALLAS - The NCAA cleared the way for athletes to profit off their name Thursday, the eve of legislation becoming law in several states that would allow for such compensation.

The expected approval from the NCAA Board of Directors came a few days after a recommendation from the Division I Council to allow athletes in every state to pursue compensation for their name, image and likeness without jeopardizing their college eligibility.

The NCAA’s decision to suspend restrictions on payments to athletes for things such as sponsorship deals, online endorsements and personal appearances applies to all three divisions or some 460,000 athletes.

The NCAA also is allowing athletes to enter into agreements with agents while encouraging them to keep schools informed. The NCAA said schools are responsible "for determining whether those activities are consistent with state law."

Brando Martinez, 20, talks with FOX Television Stations about becoming a photographer despite losing his arm and fingers as an infant in a house fire.

"This is an important day for college athletes since they all are now able to take advantage of name, image and likeness opportunities," NCAA President Mark Emmert said. "With the variety of state laws adopted across the country, we will continue to work with Congress to develop a solution that will provide clarity on a national level."

The NCAA wants to have federal laws or its own permanent rules regarding the issue known as NIL, but was forced to seek a temporary solution rather than have athletes in some states eligible for compensation while others were not.

More than 10 states have laws set to go into effect Thursday that would have undercut existing NCAA rules regarding such compensation for athletes.

Without NCAA action, athletes in some states could be making money without putting their college eligibility in jeopardy while their counterparts in other states could be in danger of breaking NCAA rules.

The NCAA’s stopgap measure comes less than two weeks after the U.S. Supreme Court ruled against the association in a case involving education-related benefits. That 9-0 ruling is expected to impact issues related to compensation for athletes.