The Tampa Bay Vipers spent their first day in their new uniforms as they practice in Plant City.

PLANT CITY, Fla. - It's another first for the Tampa Bay Vipers: Their first day in their new uniforms, and first day in pads.

"It feels good to finally have some team gear," said Vipers punter Jake Schum. "Throw on a helmet again. It's been a couple years, but if feels like riding a bike."

The Vipers have assembled a good collection of players from all over the country, from all kinds of backgrounds -- including five players from the Tampa Bay area.

Wide receiver Ryan Davis played at Lakewood High in St. Petersburg and made a name for himself at Auburn University. He went undrafted this year and signed as a free agent with the New England Patriots before getting cut at the end of training camp.

Davis is happy to be home, excited for this chance to play in front of his hometown fans. 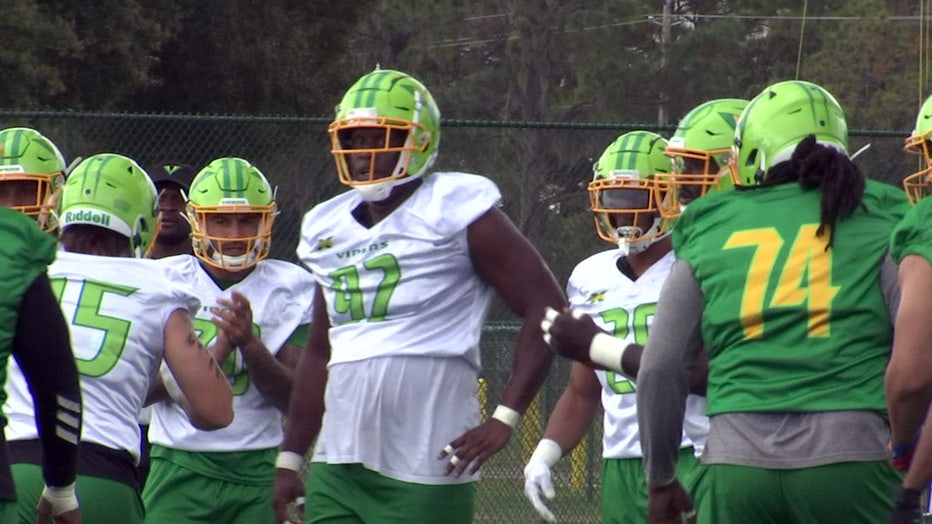 Former Plant High defensive end Bobby Richardson played for five NFL teams and was home here in Tampa when the Vipers came calling. Richardson can't wait to show up at Raymond James Stadium in his new Viper green, but he's having a little problem seeing the full logo.

But when asked if he saw the snake eye at all, he couldn't spot it.

"Man, I don't see an eye right there," said a quizzical Richardson. "I see the fangs and the 'V. But I do love this logo, though. I do love it and the jerseys and helmets too."

The Vipers will wrap up training camp December 18 in Plant City and then head to Houston for a final eight-team combined camp in January.