'Playoff Brady' ready to do what he does best

TAMPA, Fla. - When it comes to winning in the playoffs Tom Brady is better than most NFL franchises. Brady has more wins in the postseason than all but 5 teams. He’s 34-11, which is twice as many wins as Joe Montana, who has the second most.

"I feel like it's, for me, always about the team's success so it's hard to compare one year to another," Brady explained. "I feel like I want to play as a championship-level player. That's what I've said for a long time. When I'm not able to do that -- I said a long time ago when I suck I'll retire, but what I really meant was when I'm not capable of leading the team to victory then someone else has to do the job. I feel like I can do that."

With one additional game, Brady reached career highs in yards, attempts and completions. His 43 touchdowns are his second-most. So, is Brady getting better with age? He’s really not the one to ask.

"If you had asked me what my record was, I would have said, 'I don't know,'" Brady commented. "It's just the reality of doing this and staying focused on what's ahead and not looking back. I'd love to get to 35-11 – that would be my answer. Got to go win a very tough game against a great opponent." 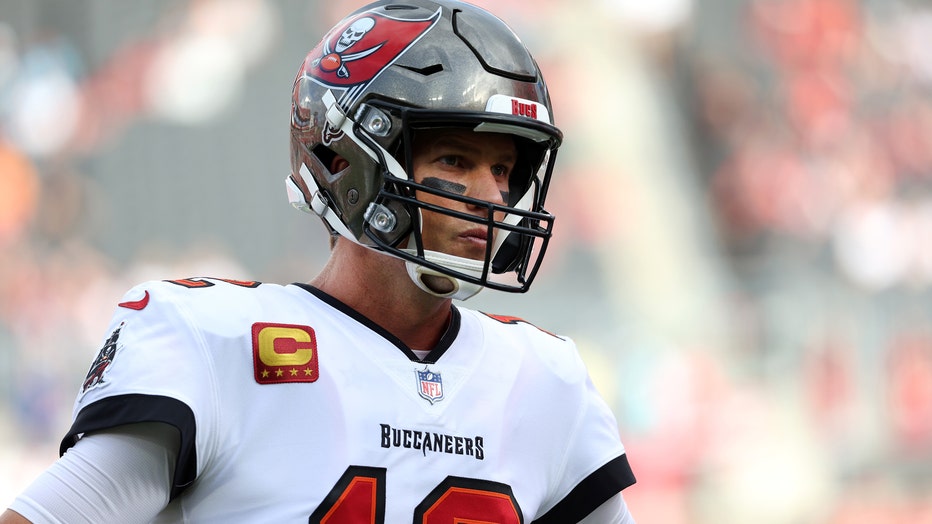 TAMPA, FLORIDA - JANUARY 09: Tom Brady #12 of the Tampa Bay Buccaneers looks on during pregame warm-ups prior to a game against the Carolina Panthers at Raymond James Stadium on January 09, 2022 in Tampa, Florida. (Photo by Mike Ehrmann/Getty Images)

Since coming to Tampa, it's been pretty much all sunshine for Tom Brady. He's played in just one rain game. Ironically it was at New England, where he had his lowest completion percentage (51.2) of the season. So how is Brady preparing for a potentially rainy and windy game on Sunday when the Bucs haven't practiced in it.

"I've played in a lot of them over the years," said Brady. "You've just got to handle it with some mental toughness, first of all. Physical prep isn't much different. We haven't had a lot of rain this year; we did in the Patriots game, so we're a little bit used to it.  You know, maybe some different cleats, just depending on what the weather's going to be. I've had a lot of experience in the Northeast in a lot of different weather conditions, so I'll be ready for it."