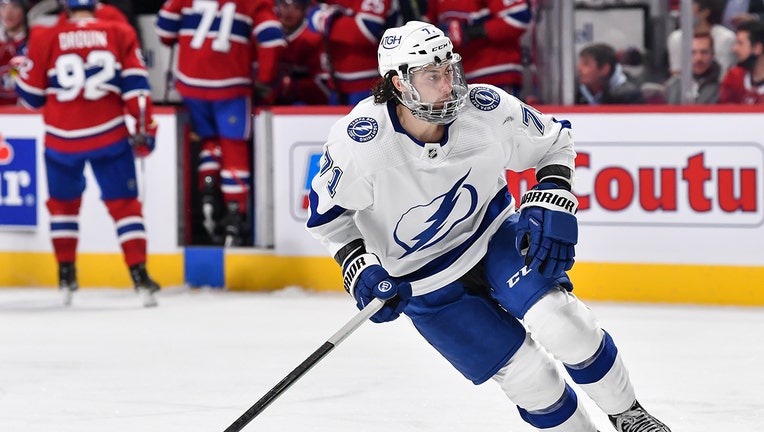 TAMPA, Fla. - Tampa Bay Lightning officials pulled a player out of a meeting because he tested positive for the coronavirus and no one in the room flinched.

As Anthony Cirelli went into the now-familiar COVID-19 protocol, the two-time defending champions practiced with their goaltending coach and an emergency backup in the net and prepared to play Montreal on Tuesday night in a Stanley Cup Final rematch without either of their NHL goalies or their coach on hand.

"It’s just the norm," assistant Derek Lalonde said Monday. "Not trying to downplay it, but I just think it’s a reality of today’s world and today’s NHL."

Hockey will return Tuesday after the league took an extended holiday break in the hope that virus cases will not continue to disrupt the season. While three more games this week were postponed — bringing the total to 70 this season — the NHL like other leagues will try to power through the latest twist in the pandemic with a possible boost on the way in the form of shorter absences for players and coaches who test positive.

MORE: Lightning without 6 players and don't know who can start in goal

The U.S. Centers for Disease Control and Prevention on Monday cut the recommended isolation period from 10 days to five, and other North American professional sports leagues have already moved in that direction. NHL Deputy Commissioner Bill Daly said, "Obviously it will spur a review of the protocol" currently in place, which includes 10 days away for those who contract the virus and experience symptoms.

While many of the cases across hockey have been asymptomatic or mild, the spread of the highly contagious omicron variant has led to a rash of positive COVID-19 test results across the league’s 32 teams. Dozens more players entered virus protocol Monday, with minor leaguers taking their place and taxi squads added to keep the NHL season going amid concerns about the quality of the on-ice product.

"Unfortunate what’s going on around the league with a lot of teams having to deal with COVID issues right now, including ourselves, but I don’t think a lot is going to change moving forward here for the next couple weeks," Lightning captain Steven Stamkos said. "We do have to get some games in if we can do it safely, and we can do it where teams have adequate players in the lineup."

Stamkos and his teammates were preparing to play without reigning playoff MVP goaltender Andrei Vasilevskiy, five other players and coach Jon Cooper. Montreal will also be without several players for the start of a three-game U.S. trip; back home, Quebec has banned fans and all eyes are on virus restrictions in Canada that could further upend the season for a league with seven teams based north of the border.

The virus continues to play a role on either side of it. Pittsburgh and Washington each added six players to the COVID-19 protocol list, and the Vegas Golden Knights found out they won’t have coach Peter DeBoer behind the bench for their game Tuesday night at Los Angeles.

Washington is set to play again Wednesday against the Nashville Predators, who are dealing with their own virus absences, but the game is scheduled to go on as planned.

"It’s not about who’s out," said coach John Hynes, whose Predators put captain Roman Josi and two other players on the COVID-19 protocol list. "It’s about the players that are in and making sure we’re physically ready to play and mentally ready to play."

Not every game will be played on time. Chicago’s game at Winnipeg scheduled for Wednesday and a home-and-home series Wednesday and Friday between Dallas and Colorado are the latest to be postponed because of coronavirus concerns.

Lightning don't know who can start in goal

The Tampa Bay Lightning return from the NHL's 6-day COVID-19 shutdown with a roster much smaller than their last game. Just 19 players were on the ice to practice, including Nikita Kucherov and Brayden Point, who are still on injured reserve.

The province of Manitoba capped ticketed crowds at 250, so any Winnipeg home games for at least the next two weeks would be played with no fans in attendance. Along with needing to find new dates for the games postponed and more sure to come, the league also could shift games in Canada to later in the season with the goal of making sure there’s a crowd in the stands.

As of now, the Winter Classic between St. Louis and Minnesota is still scheduled to be played in front of a crowd of almost 40,000 at Target Field in Minneapolis on Saturday night in keeping with the league’s New Year’s Day tradition.

"We’re just happy to be playing hockey," Blues defenseman Justin Faulk said. "I don’t want to be sitting at home doing nothing during this time. I think we should be playing."

In an effort to do just that, the league brought back "taxi squads," a feature from the pandemic-shortened 2020 season. Each team will be able to keep up to six players on the taxi squad and can make more emergency recalls from the minors to make sure there are 18 skaters and two goaltenders available for every game.

"It’s what needed to happen," Carolina coach Rod Brind’Amour said. "You’re going to have a lot of these issues, so that’s one way to take care of it, have enough players around that you can keep playing. I think at the end of the day that’s what we’re trying to do: have a system in place that you can get guys into the lineup quickly."

The league shut down for the annual Christmas break two days earlier than usual and extended it through Monday given the rapidly growing number COVID-19 cases. Several teams have reported asymptomatic or very mild cases, including 63-year-old Buffalo Sabres coach Don Granato, who was diagnosed with Hodgkin lymphoma in 2015.

"Everybody’s asymptomatic, which is great, and, obviously, they’re testing every day, so if they get a negative test, they come back in," Buffalo general manager Kevyn Adams said, referring to Granato and forwards Zemgus Girgensons, Dylan Cozens and Mark Jankowski, who are in the virus protocol. "It it is hard when even if you’re asymptomatic and you come back and you’ve been back for a while, you need a little time to get yourself back. But, yeah, so far with the way our staff and players have been asymptomatic across the board."