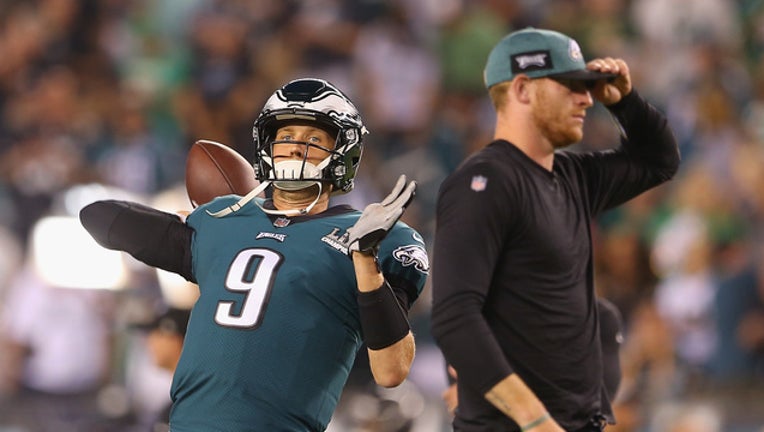 Nick Foles #9 of the Philadelphia Eagles warms up as Carson Wentz #11 looks on before the game against the Atlanta Falcons at Lincoln Financial Field on September 6, 2018 in Philadelphia, Pennsylvania. (Photo by Mitchell Leff/Getty Images)

PHILADELPHIA (WTXF) - Nick Foles will remain the starter at quarterback for the Philadelphia Eagles as they head into Sunday’s matchup against the Tampa Bay Buccaneers.

Third-year quarterback Carson Wentz continues to recover from a torn ACL he suffered against the Los Angeles Rams last December. Wentz has yet to be cleared for contact.

Foles helped lead the Eagles to a 1-0 start with a win over the Atlanta Falcons last Thursday. The passing game struggled in their opening game in the absence of wide receiver Alshon Jeffrey. Foles finished the game completing 19 of 34 passes for 117 yards, no touchdowns and one interception.

Eagles running back Darren Sproles has been ruled out for Sunday's game with an injured hamstring. Wide receiver Alshon Jeffrey has also been ruled out.

Tampa Bay will also be starting a backup quarterback on Sunday in veteran journeyman Ryan Fitzpatrick.  Fitzpatrick led an explosive performance by the Tampa Bay offense in their 48-40 win over the New Orleans Saints. He completed 21 of 28 passes for 417 yards and four touchdowns. Tampa Bay’s starter Jameis Winston is sidelined while he serves the second week of a three-game suspension.

This week, the Eagles have made some moves in an attempt to bolster their passing game after Thursday’s performance. Tuesday, the team re-signed veteran receiver Kamar Aiken, who was with the team in the preseason. They also cut wide receiver Markus Wheaton. Braxton Miller, a former Houston Texan was also signed to the team’s practice squad.