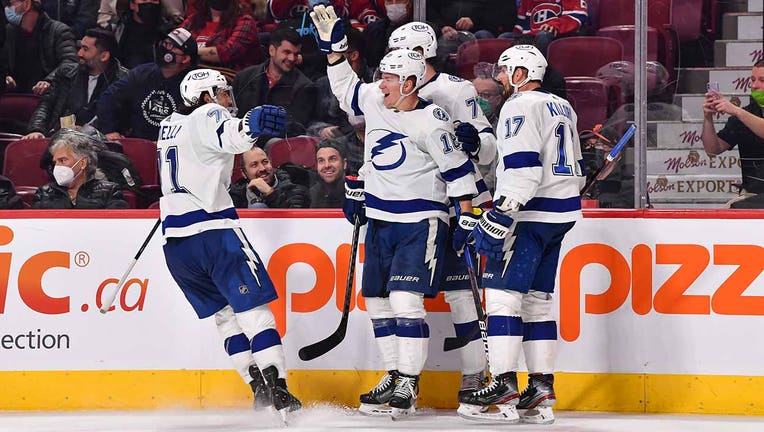 MONTREAL, QC - DECEMBER 07: Ondrej Palat #18 of the Tampa Bay Lightning celebrates his goal with teammates Anthony Cirelli #71, Victor Hedman #77 and Alex Killorn #17 during the third period against the Montreal Canadiens at Centre Bell on December 7

MONTREAL - Ondrej Palat scored with 38 seconds left in the third period, giving the Tampa Bay Lightning a 3-2 win over the Montreal Canadiens on Tuesday night.

"It wasn’t a perfect game but it’s two points on the road so I’ll take it," Palat said. "(Alex Killorn) made the right play, it was a two-on-one and I scored. I thought we did a good job in the last 10 minutes."

Head coach Jon Cooper said his team is in the middle of its toughest stretch of the season, with seven of eight games coming on the road. But instead of falling to the Eastern Conference’s bottom dwellers, Tampa Bay tied the game and bypassed overtime to claim a fourth straight win.

"It is a different group (from the 2020-21 season), but they are finding a way," Cooper said. "We’ve been in 10 overtime games already this year, we weren’t at 10 all year last year. So I’ve got to give credit, they’re finding ways to win.

"If we can steal a couple like we did tonight, we’re taking them and running and we’re off to Toronto. You have to get darn near 100 points in this league now to get in the playoffs."

Head coach Dominique Ducharme believed his team came out to play against the two-time champions and deserved the win, but dropped the game in the final two minutes.

"It’s frustrating because we obviously deserved better," Ducharme said. "Two plays at the end and they took advantage of the chances they had.

"Having that result tonight, I thought it would’ve been a positive in the group."

Tampa Bay fell behind 2-1 after surrendering goals to Suzuki and Hoffman, but the Lightning rallied in the third period.

Perry scored the tying goal with just over two minutes left in the third in his first game back Montreal, setting the stage for Palat’s winner.

Maroon scored in the first period for Tampa Bay. The Canadiens made an early mistake when Kale Clague turned the puck over in front of his own net, giving Maroon an easy opportunity to give the Lightning the lead in the first.

Montreal tied it a 1-all at 4:20 of the second period on Suzuki’s sixth goal of the season.

Hoffman scored the go-ahead goal on a shot from the top of the faceoff circle that went through a crowd of players and beat Vasilevskiy.

Palat scored the winner at 19:22 of the third period.

The Habs had yet another blow to their squad as Christian Dvorak left the game with a lower-body injury. Ducharme said that Dvorak will undergo more tests on Wednesday.

"It seems like we lose a player or two every day," Ducharme said. "And on a game like that where we play a solid game and they make the difference on two last plays."

Lightning: At Toronto on Thursday in the fourth game of a five-game trip.