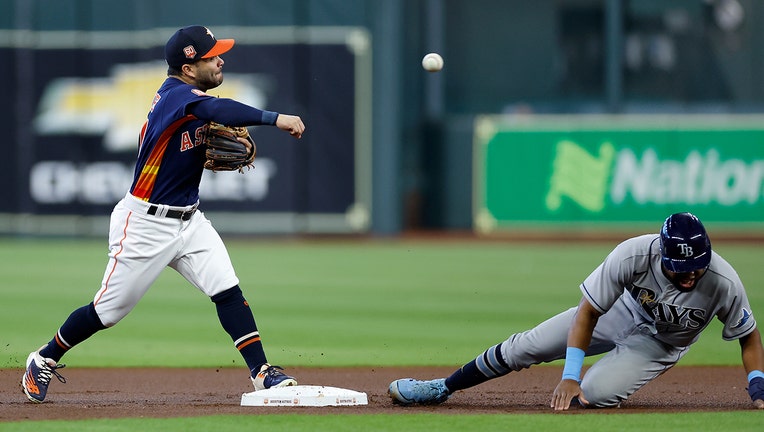 HOUSTON, TEXAS - OCTOBER 02: Jose Altuve #27 of the Houston Astros forces Manuel Margot #13 of the Tampa Bay Rays out at second and throws to first in the first inning at Minute Maid Park on October 02, 2022 in Houston, Texas. (Photo by Tim Warner/Ge

HOUSTON - Jeremy Pena hit an early two-run homer and drove in an insurance run late, lifting the Houston Astros to a 3-1 victory over the Tampa Bay Rays on Sunday.

One pitch after Jose Altuve’s leadoff bunt single, Pena belted a cutter by Rays starter Corey Kluber (10-10) over the right-field fence and into the home bullpen. That put the Astros ahead early, and Houston maintained that lead with strong pitching and key defensive plays, including Pena’s diving stop and throw to deny Ji-Man Choi in the fourth inning.

After homering only once in August, Houston’s rookie shortstop has five homers since September and is up to 21 for the season.

Pena had three hits, punctuated by a two-out, opposite-field RBI single in the seventh inning to plate Chas McCormick. That run off Rays reliever Easton McGee was unearned, because McCormick reached on Jonathan Aranda’s error at second base.

Astros starter Luis Garcia (15-8) pitched six innings of one-run ball, allowing three hits and one walk with four strikeouts. Garcia is 7-0 in his last eight starts with a 3.20 ERA, and his seven wins since Aug. 12 lead the AL. For the season, Garcia is tied with Shohei Ohtani for fourth in AL wins.

Garcia surrendered his lone run in the second inning when Choi doubled and Christian Bethancourt singled, but the young right-hander responded by retiring the next nine batters and 14 of the next 15.

Ryne Stanek, Bryan Abreu and Rafael Montero each pitched a scoreless relief inning to secure the win in front of 35,809 fans, with Montero recording his 14th save. Usual closer Ryan Pressly was unavailable after closing out Saturday’s win.

Kluber (10-10) settled in after allowing the two quick hits, giving up six hits and just those two runs across five innings, striking out four. One came against Astros slugger Yordan Alvarez, who struck out swinging in the fifth inning with two runners on and two outs.

In a matchup of teams bound for the 2022 AL postseason, Houston (104-55) won for the fifth time in six games against the Rays, all during the past two weeks. After losing Friday’s opener, the Astros won the next two games to take the series.

The Rays (86-73) are scuffling as the postseason approaches, having lost nine of their last 13 games. Choi led Tampa Bay’s sluggish offense Sunday with two hits and a walk in four at-bats, and he scored their lone run.

The Rays are now guaranteed to open the 2022 postseason on the road as either the second or third AL wild-card team. Tampa Bay currently has the AL’s third spot and is no longer able to catch Toronto, which holds the AL’s top position. After defeating Boston on Sunday, the Blue Jays lead the Rays by four games with only three left to play. Only the top wild-card team will host its initial series.

By winning, the Astros clinched MLB’s second-best record after the Dodgers, giving Houston home-field advantage versus all other potential postseason opponents.

Rays: INF Yandy Diaz (left shoulder strain) was out of the lineup for a second straight day. After clinching a postseason spot Friday, manager Kevin Cash suggested it was a precautionary measure. Diaz had a pinch-hit RBI in Saturday’s ninth inning.

David Peralta started Sunday’s game in left field but was removed after a first-inning flyout due to right hip tightness. Miles Mastrobuoni shifted to the outfield and Aranda, who had the game’s lone error, replaced Mastrobuoni at second base.

After missing one start due to illness, RHP Lance McCullers Jr. (4-1, 2.38 ERA) returns Monday against Philadelphia for the opener of a three-game home series to conclude Houston’s regular season. The Phillies have yet to name their starter.