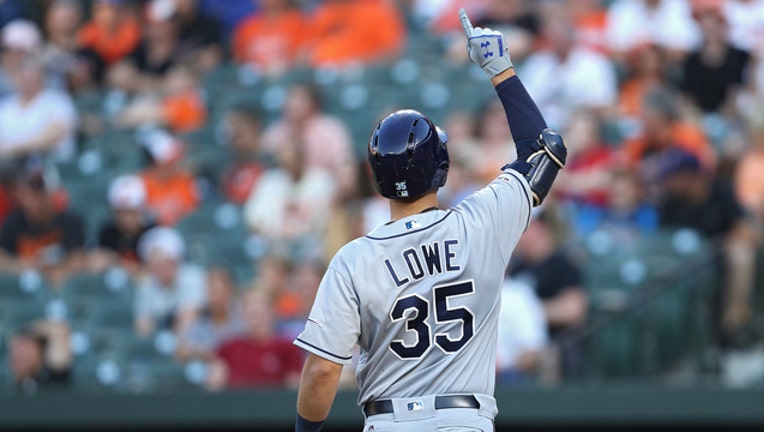 Nate Lowe #35 of the Tampa Bay Rays celebrates his two run home run against the Baltimore Orioles during the second inning at Oriole Park at Camden Yards on July 12, 2019 in Baltimore, Maryland. (Photo by Patrick Smith/Getty Images)

BALTIMORE, Md. (AP) - Well-rested and eager to resume their pursuit of a playoff berth, the Tampa Bay Rays came out of the All-Star break in full hitting mode.

Tommy Pham homered to spark a seven-run first inning , and the Rays pounded out 20 hits in a 16-4 rout of the Baltimore Orioles on Friday night.

Seeking to reach the postseason for the first time since 2013, second-place Tampa Bay kept the heat on the Yankees in the AL East with its most productive offensive performance of the season.

The Rays sent 11 batters to the plate in the opening inning against Dylan Bundy (4-11). After Pham went deep, Tampa Bay added four doubles and three singles in an uprising that Bundy fueled with a wild pitch and a balk.

"The first inning, obviously, everybody played a role," Rays manager Kevin Cash said. "Big hits, timely hits. We talked about it before the game, and they came out and did it."

"I'm sure they felt good coming off a four-day break," Cash said. "Offensively, you can't ask for much more than that. Just a really good way to start the second half."

Given all that offensive support, Yonny Chirinos (8-4) had an easy time earning his first victory in six starts since June 7. The right-hander gave up two runs and four hits over seven innings with eight strikeouts.

Coming in with the worst record in the majors, Baltimore committed two errors, fired three wild pitches and threw the ball to the wrong base on several occasions.

"Obviously, really disappointed with how we played. We did not play the game well," manager Brandon Hyde said. "That was really sloppy defensively and just poor baseball."

Bundy lasted just one inning before complaining of soreness in his right knee.

"My knee's a little sore, but I just wasn't locating and didn't really have any good movement on my pitches," the right-hander said. "They came out aggressive and were hitting the ball where there's plenty of grass. I couldn't slow them down."

Utility player Stevie Wilkerson pitched the ninth inning for the Orioles, the fourth time this season that Hyde has used a position player to pitch. Wilkerson retired the side in order.

Rays: Relief pitchers Chaz Roe (right flexor strain) and Jose Alvarado (right oblique strain) were placed on the 10-day injured list. "Chaz was a little bit of a surprise, simply because it came during the All-Star break. Hopefully a couple days off will help clean him up," Cash said. The Rays filled out the roster by activating reliever Diego Castillo, who had been on the IL with shoulder inflammation, and recalling reliever Hunter Wood from Triple-A Durham. ... 2B Brandon Lowe, who was placed on the IL on July 4 with a bruised shin, "is still moving kind of slow," Cash said of the team leader in HRs.

Orioles: OF DJ Stewart (ankle sprain) played LF in a rehab game with Triple-A Norfolk on Thursday and "felt good after the game," Hyde said. ... After having his previous rehab assignment shut down because of arm soreness, RHP Nate Karns (forearm strain) allowed three runs, two hits and three walks on Friday night in a start for Class A Frederick against Carolina before being lifted.

Rays: Tampa plans to recall LHP Brendan McKay from Durham to start the first game of Saturday's split doubleheader. McKay (1-0, 2.45 ERA), who was in the Rays' clubhouse Friday, will serve as the team's 26th man. Charlie Morton 10-2, 2.32) will start the nightcap.

Orioles: RHP Aaron Brooks, claimed off waivers from Oakland on July 6, will make his Baltimore debut in the first game. All-Star reserve John Means (7-4, 2.50 ERA) will start the second game.