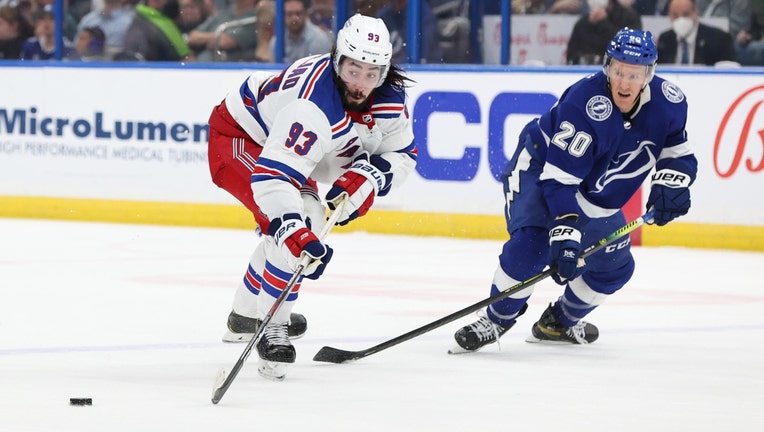 TAMPA, FL - DECEMBER 31: Mika Zibanejad #93 of the New York Rangers skates past Riley Nash #20 of the Tampa Bay Lightning during the third period at the Amalie Arena on December 31, 2021 in Tampa, Florida. (Photo by Mike Carlson/Getty Images)

Igor Shesterkin stopped 25 shots, and Alexis Lafrenière also had a goal for the Rangers.

Goodrow, a member of Tampa Bay’s Stanley Cup championship teams, got his second ring and, later, a standing ovation during a video tribute in the first period.

"It was a special day," Goodrow said. "The win felt great. The standing ovation was something else. It was one of those moments. Here I am a member of the New York Rangers, and come back here a two-time Stanley Cup champion and getting a video tribute. It's something beyond my wildest dreams growing up as a kid."

"Am I disappointed we didn’t get two points? I am," Cooper said. "But if they were going to get two points away from us and Goody was going to score two, I can sleep at night because he meant the world to our organization."

Corey Perry scored the tying goal with 1:57 to go in regulation for Tampa Bay, which also got goals from Steven Stamkos and Ross Colton. Backup goalie Brian Elliott returned from COVID-19 protocols and made 20 saves in place of Andrei Vasilevskiy, who remains in the protocols and missed his third consecutive game.

"It's tough," Rangers coach Gerard Gallant said about how COVID-19 is impacting the Lightning. "A real good hockey team missing some pieces but they're still going to come out and battle."

Perry also had a tying goal with 20 seconds left in regulation in a 5-4 overtime win over Montreal on Tuesday night.

The Lightning were coming off a 9-3 loss Thursday night at Florida in which minor league callups Maxime Lagace and Hugo Alnefelt played in the net.

"You challenge your team and then you see what they have," Cooper said. "They responded."

The Rangers took a 2-1 lead in the second period behind goals from Lafrenière and Goodrow following miscues by Elliott. Goodrow had a short-handed goal after Greg McKegg stole Elliott’s cross-ice pass from along the right wing boards at 14:30.

Stamkos scored the lone goal of the first during a power play with 1:39 left. The Lightning had a 10-3 shot advantage in the period over the Rangers, who had stretches of eight and nine minutes without one.

"I thought tonight it was a lot better in all areas of the game," Tampa Bay defenseman Victor Hedman said. "Competed hard. A couple tough breaks against us but at the end of the day I liked our attitude, came back again late in the game."

Stamkos tied Patrick Marleau for 32nd on the career power-play goal list with 172. The Lightning captain has a point in 15 of his last 16 games (seven goals, 21 points). … Rangers LW Artemi Panarin had several good scoring chances but failed to score. He has one goal in 13 games against Tampa Bay. ... Shesterkin tied Gilles Villemure team record of reaching 40 career wins in 67 games.

The Rangers and Lightning complete a home-and-home series Sunday in New York.