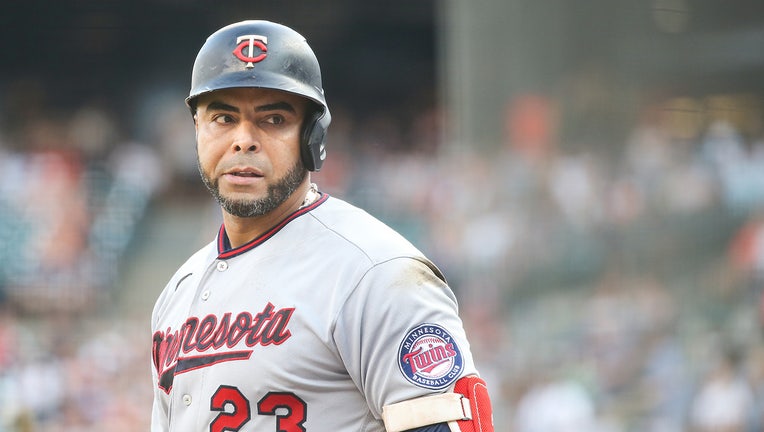 DETROIT, MI - JULY 17: Minnesota Twins designated hitter Nelson Cruz (23) looks on during the second game of a regular season Major League Baseball game between the Minnesota Twins and the Detroit Tigers on July 17, 2021 at Comerica Park in Detroit,

TAMPA, Fla. - Nelson Cruz packed up his big bat and joined a contender.

The Tampa Bay Rays acquired Cruz, one of baseball’s most proven sluggers, in a four-player trade with the Minnesota Twins on Thursday night.

Cruz was well aware of the likelihood he’d be dealt this month, with the disappointing Twins well out of contention. Nonetheless, he told reporters the news still felt "shocking" and "heartbreaking" to him after becoming fond of the organization over his 2 1/2 seasons in Minnesota.

"It’s a tough one. I guess it’s a new chapter, and I will embrace it the way I embrace everything in my life — to go help the Tampa Bay Rays to win a championship," Cruz said.

Moments before opening a four-game series at Cleveland, the Rays, who entered the night one game behind first-place Boston in the AL East, announced they got Cruz and minor leaguer Calvin Faucher from Minnesota in exchange for minor league right-handers Joe Ryan and Drew Strotman.

The 41-year-old Cruz has 436 career homers and 1,202 RBIs. He’ll bring some needed pop to Tampa Bay’s lineup and should help the Rays against left-handers. They’re hitting .226 versus lefties.

Following Tampa Bay’s 5-4 comeback win over the Indians, Rays manager Kevin Cash said he was thrilled to be adding someone of Cruz’s caliber.

"It’s very exciting," said Cash, who recently managed Cruz in the All-Star Game at Denver. "We’re a good team and we know we just got better by adding Nelson Cruz, one of the hottest bats out there. His presence. His leadership. I’ve known him for a long time now, and you never hear anyone say a negative thing about him, so we’re adding a high-quality hitter and a high-quality person."

Cash wasn’t exactly sure when Cruz will join the Rays.

Beyond his skills at the plate, Cruz gives Tampa Bay a seasoned player with years of knowledge.

"We’re going to allow him to go out and do what he does," said Cash, who will have to juggle his roster to make sure Cruz is usually in the lineup. "He’s going to DH and hopefully man that position for three months."

The seven-time All-Star also has plenty of playoff experience with 17 homers and 37 RBIs in 46 postseason games. He’s batting .294 with 19 homers and 50 RBIs this season, and over 258 games with the Twins he finished with 76 homers and a .984 OPS.

"People joke about how he’s ageless, and it really does feel that way," Twins president of baseball operations Derek Falvey said.

With a week until the trade deadline and little shot at making the playoffs, the Twins figured they’d get something for Cruz to begin building toward the future. Minnesota entered Thursday at 41-55.

"He may be the best teammate I’ve ever seen in terms of the way he goes about his business, the way he puts his arm around people, the way he helps us become better in our front office jobs and coaching staff jobs," Falvey said. "This guy is beyond special."

A 17-year veteran, Cruz signed a one-year, $13 million deal with Minnesota in February. He has also played for Baltimore, Texas and Seattle. He hit at least 37 homers per season from 2014-19. He belted a career-high 44 homers for the Mariners in 2015.

Both Ryan and Strotman were in Triple-A Durham’s rotation.

Ryan, who will also pitch for Team USA in the Tokyo Olympics, had a 3.63 ERA with 75 strikeouts in 57 innings for the Bulls and was ranked by MLB.com as the No. 10 prospect in Tampa Bay’s system. The 25-year-old was a seventh-round draft pick in 2018.