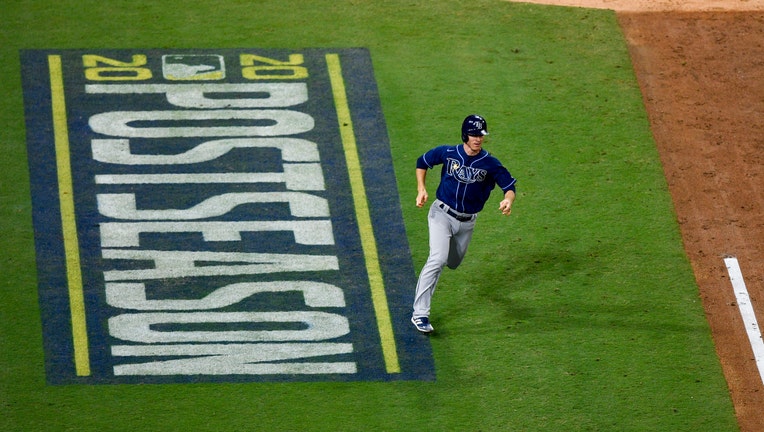 Joey Wendle singles in the sixth inning which scored two runs during Game 3 of the ALCS. (Matt Thomas/MLB Photos via Getty Images)

SAN DIEGO, Calif. - Joey Wendle hit a go-ahead, two-run single two batters after another critical error by José Altuve, and the Tampa Bay Rays rallied for a 5-2 win against the Houston Astros on Tuesday night that moved them within one victory of the second World Series appearance in franchise history.

Gold Glove center fielder Kevin Kiermaier saved several runs with two outstanding catches before leaving with a hand injury as Tampa Bay took a 3-0 lead in the best-of-seven AL Championship Series at Petco Park. Towering righty Tyler Glasnow, who grew up just north of Los Angeles, will try to complete the sweep and deliver the Rays their first pennant in 12 seasons Wednesday night when he opposes Zack Greinke.

Tampa Bay reached the World Series in 2008 but lost to the Philadelphia Phillies.

“There’s a very confident mindset with this group," Rays manager Kevin Cash said. "We’ll stay consistent and do everything we can behind Glasnow to make plays.” 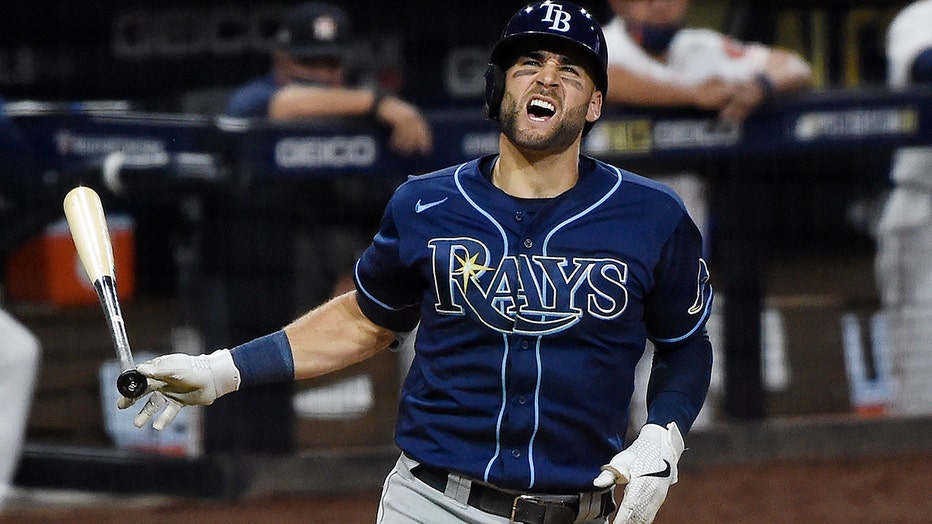 Kevin Kiermaier reacts after being hit by a pitch against the Houston Astros during the sixth inning in Game 3 of the ALCS. (Harry How/Getty Images)

The innovative Rays had one of baseball's lowest payrolls during the pandemic-shortened season and still finished with the AL's best record at 40-20. They often have a different player come up big every night, whether it's a batter or reliever — or sometimes both. They've also played spectacular defense.

The Astros got into the postseason with a 29-31 record before going 5-1 to reach the ALCS. But they've looked nothing like the team that won the AL pennant two of the last three seasons and they remain villains in many peoples' eyes for their sign-stealing scandal three years ago en route to a World Series title.

After Diego Castillo pitched the ninth for his second save, stranding two baserunners, he clapped his hands and the Rays celebrated with their usual handshake line.

“We’re in a good spot, but we’re not counting anything yet. We know we have another ballgame to win,” Wendle said.

RELATED: 'The Catch' is now a shirt, thanks to St. Pete entrepreneur's latest effort

The Astros fell apart in the sixth, when the Rays sent 11 batters to the plate and scored five runs on four hits, two hit batters and Altuve’s error at second base. One of the runs was unearned.

Losing pitcher José Urquidy held Tampa Bay to two singles through five scoreless innings before Randy Arozarena singled leading off the sixth. Brandon Lowe hit a grounder to Altuve, who went for a routine forceout but short-hopped the throw and it skipped past shortstop Carlos Correa and into left field.

Manuel Margot, whose three-run homer in Game 2 followed the first of Altuve’s two errors, laid down Tampa Bay’s first sacrifice bunt of the season. Paredes hit Kiermaier on the hand to load the bases and then grazed Willy Adames on the pinkie with another pitch to bring in another run.

Pinch-hitter Hunter Renfroe, who like Margot began his career with the San Diego Padres, flared a double into right to bring in two more runs. 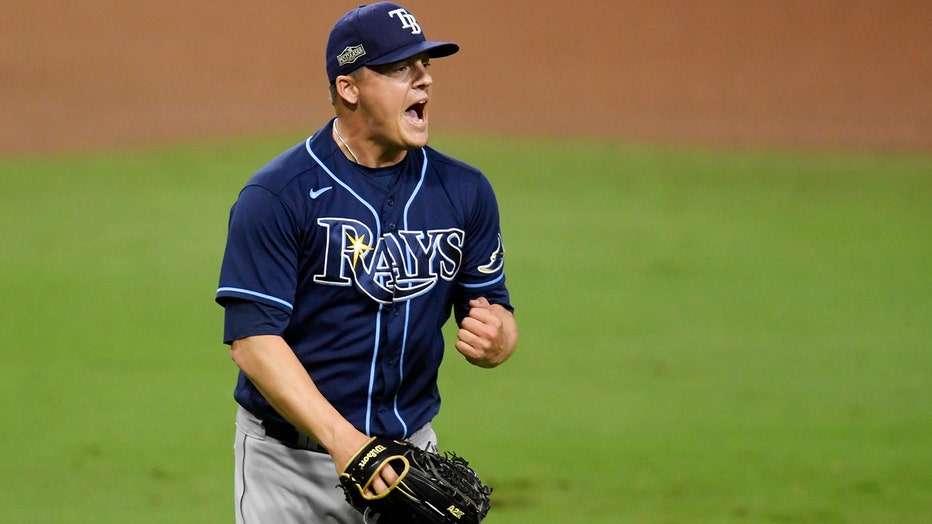 Aaron Loup celebrates after closing out the eighth inning with the bases loaded in Game 3 of the ALCS. (Harry How/Getty Images)

Renfroe and Margot were traded to the Rays in separate deals last offseason.

“That big hit has been eluding us the whole series,” Baker said. "It seems like they get whatever they want.”

Left-hander Ryan Yarbrough pitched into the sixth for the win, holding the Astros to two runs and three hits while striking out five and walking two.

Yarbrough allowed Altuve’s homer in the first inning, his second of the series. Michael Brantley’s homer to left leading off the sixth chased Yarbrough.

Two batters after Altuve’s shot, Bregman missed a home run by a matter of inches as Kiermaier made a leaping catch of his drive near the top of the fence in center.

Altuve also homered in the first inning of the opener, a 2-1 Rays win.

Arozarena, who defected from Havana to Mexico in 2015, doubled in the third for his eighth extra-base hit this postseason, one shy of tying Melvin Upton Jr. and Evan Longoria, both in 2008, for the most in a single postseason in Rays history. Arozarena has four homers this postseason.

Besides his leap to rob Bregman, Kiermaier made a diving catch of Correa’s liner with two runners on to end the third. Renfroe made a diving grab of Springer’s sinking liner to end the seventh. With the bases loaded and one out in the eighth, Renfroe also made a sliding basket catch of Kyle Tucker's fly ball.

Rays: Kiermaier exited with a bruised left hand after getting hit by the pitch in the sixth. X-rays were negative.

“Try to be hockey tough in these kind of situations, but we'll see how my recovery process goes,” Kiermaier said.

Rays: The 6-foot-8 Glasnow (2-0, 4.05 ERA) will make his fourth start of the postseason. He beat the New York Yankees 7-5 while striking out 10 in Game 2 of the AL Division Series and then started the clincher Friday night and went 2 1/3 innings on just two days’ rest.

Astros: Greinke (0-0, 5.19) will be making his third start this postseason and the 19th playoff start of his career. He experienced a sore arm during the ALDS against Oakland but said he should be fine.