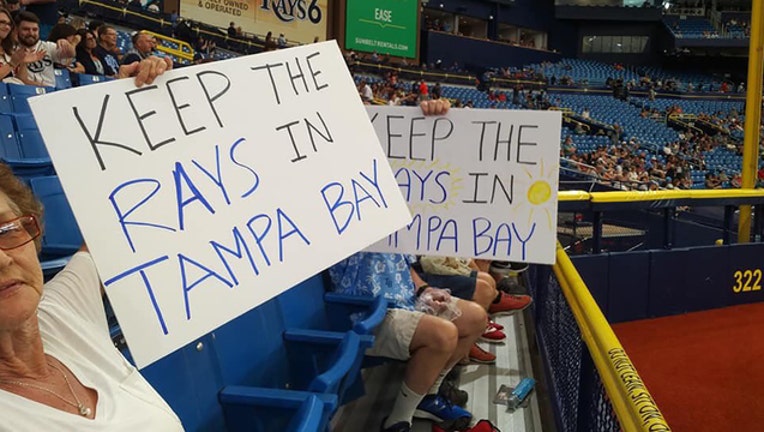 ST. PETERSBURG, Fla. (FOX 13) - It's a common feeling shared among many Tampa Bay Rays fans this week: they don't want to share their team with Montreal.

"We are way against it," said fan Christopher Haight from Bradenton.

A number of fans showed up to support their Tampa Bay team.

Haight and fellow fan Kaitlyn Platt came to watch the game and to protest a potential half-season move to Montreal.

"We rather not have a team then have half a season with sharing it with Montreal. We are here to keep the Rays here permanently and only here," Haight said.

They carried signs, wore their feelings on their shirts and got others to voice their own opinions before and during the game.

"I was actually pretty upset," Platt said. "I couldn't believe they were going to get rid of our team."

"I made this group about 15 minutes after what happened. It already has 300 members. In 3 days we've gotten 100 members a day," she said.

Their members continue to grow with fans like Joshua Maus.

"You want to have a synergistic approach to this. You don't want to have your team in Montreal -- this is the Tampa Bay Rays for God's sake," he said.

Even as they tried to rally others along with them, there's one negative sign: the empty seats surrounding them and throughout the stadium.

Haight said it's not finished yet. He plans to hold monthly rallies for others to join in.

"We are not stopping. This will not stop," he said.