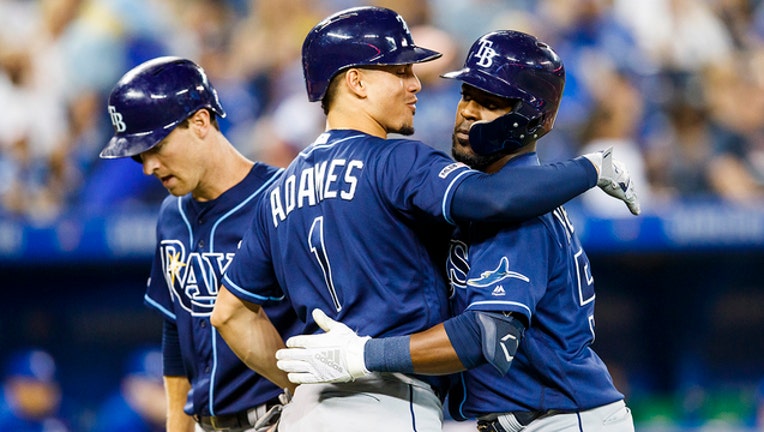 Guillermo Heredia #54 of the Tampa Bay Rays celebrates his two run home run with Willy Adames #1 against the Toronto Blue Jays in the eighth inning during their MLB game at the Rogers Centre on July 28, 2019. (Photo by Mark Blinch/Getty Images)

TORONTO (AP) - Joey Wendle drove in the tiebreaking run with a bases-loaded groundout in the ninth inning and the Tampa Bay Rays rallied from a seven-run deficit to beat the Toronto Blue Jays 10-9 on Sunday.

Ji-Man Choi and Guillermo Heredia each hit two-run home runs and Willy Adames added a game-tying solo shot in the eighth as the Rays bounced back after blowing a seven-run advantage in Saturday's 10-9, 12-inning defeat.

Chaz Roe (1-3) pitched one inning for the win, Oliver Drake got one out in the ninth and Diego Castillo finished for his eighth save in nine opportunities.

On Saturday, the Blue Jays were down 9-2 after 5½ innings before tying it with a four-run ninth and winning on Teoscar Hernandez's leadoff homer in the 12th.

This time, Toronto led 8-1 after five but couldn't hold on. Tampa Bay chased Blue Jays right-hander Aaron Sanchez in a three-run sixth, but Toronto's Vladimir Guerrero Jr. hit an RBI double in the bottom half, making it 9-4.

The Rays cut it to 9-6 with two runs in the seventh, then tied it in the eighth on back-to-back home runs from Guillermo Heredia and Willy Adames. Heredia hit a two-run shot, his third, and Adames tied it with his 12th homer and second in two games. Both homers came off Blue Jays right-hander David Phelps.

Tampa Bay's comeback denied Sanchez his first victory since he beat Oakland on April 27. Sanchez, who has lost 13 consecutive decisions, allowed four runs and six hits in 5 2/3 innings. He walked none and struck out 10, including six straight to start the game, a Blue Jays' record.

Tampa Bay's Travis d'Arnaud chased Sanchez with a two-run double in the sixth. D'Arnaud has 23 RBIs in 18 July games, extending his team record by a catcher in a calendar month.

During the game, Toronto traded veteran utilityman Eric Sogard across the diamond to Tampa Bay. The Blue Jays are expected to receive a minor leaguer in return for Sogard, who is having a career season.

Sogard is batting .300 with 10 home runs and 30 RBIs in 73 games. He was due to start in right field but was scratched shortly before first pitch and replaced by Billy McKinney.

Later, Tampa Bay traded right-hander Ian Gibaut to Texas for a player to be named or cash. The 25-year-old Gibaut made his major league debut on July 12, giving up two runs in two innings in his only game for the Rays.

Rays: OF Kevin Kiermaier started in CF and went 0 for 3 with a walk at Class-A Charlotte on Sunday, his second rehab game. Kiermaier went 1 for 5 with a double as the DH on Saturday. Manager Kevin Cash said Kiermaier remains on track to come off the injured list Wednesday. ... INF Daniel Robertson (right knee) went 1 for 3 and started at SS in a rehab game with Triple-A Durham on Saturday. It was Robertson's first game with Durham. ... OF Avisail Garcia, who left Saturday's game because of an illness, was held out of the starting lineup Sunday. ... RHP Ryne Stanek (right hip) threw a bullpen before the game and will throw one more before making a minor league rehab appearance. Cash said Stanek could rejoin the Rays next weekend. ... OF Tommy Pham (sprained right hand) was replaced by Mike Brosseau in the seventh. X-rays were negative.