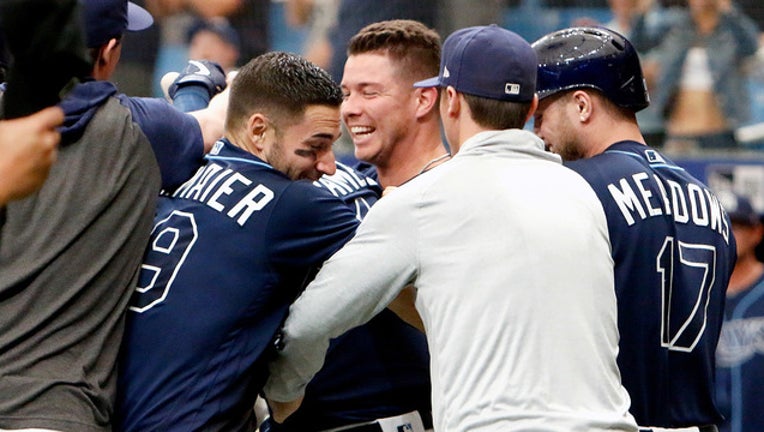 Tampa Bay Rays teammates celebrate of a 7-6 victory during the bottom of the ninth inning of their game against the Seattle Mariners at Tropicana Field on August 21, 2019 in St. Petersburg, Florida. (Photo by Joseph Garnett Jr. /Getty Images)

ST. PETERSBURG, Fla. (AP) - Kevin Kiermaier drove in four runs, including a solo homer during a two-run ninth inning, and the Tampa Bay Rays avoided a three-game sweep by beating the Seattle Mariners 7-6 on Wednesday.

Kiermaier tied it at 6-6 on a leadoff homer against Matt Magill (3-1). The Rays then loaded the bases on Willy Adames' single, a double by Mike Brosseau and an intentional walk to pinch-hitter Ji-Man Choi with no outs before Magill's wild pitch with Tommy Pham batting allowed Adames to score the winning run.

Daniel Vogelbach had a solo homer and Mallex Smith added a two-run triple off Emilio Pagan (3-2) as the Mariners went up 6-5 in the top of the ninth.

Tampa Bay entered the game a percentage point behind Oakland for the second AL wild card. The Athletics were at home later Wednesday against the New York Yankees.

The Rays went 3-3 during a six-game homestand against last-place Seattle and Detroit.

Tim Lopes had two RBIs for the Mariners, who head home after a 6-3 road trip.

Kiermaier put the Rays ahead 4-3 on a two-run single in the fourth and added a sixth-inning, run-scoring groundout.

Fraley made his major league debut starting in center and became the 63rd player used by the Mariners this season, one away from the MLB record set by Texas in 2014.

Heredia, mired in a 1-for-23 slide, made it 2-0 on his third-inning homer off Wade LeBlanc.

Pham walked in the first, stole second and third, and scored on Travis d'Arnaud's sacrifice fly.

Mariners: OF Mitch Haniger (ruptured testicle) was the DH at Triple-A Tacoma Tuesday but will need to play a whole game defensively before returning.

The Rays purchased the contract of RHP Aaron Slegers from Triple-A Durham. At 6-foot-10, he is the tallest player in team history and, according to Baseball Reference, tied for the second-tallest in the majors behind 6-foot-11 Jon Rauch. "I saw (college basketball analyst) Jay Bilas at the barber shop," Slegers said. "I think he double-taked. He couldn't believe he didn't know every seven-footer in the city."

Rays 1B Jesus Aguilar was ejected for the first time in his career for arguing with home plate umpire John Libka after a called third strike in the sixth.