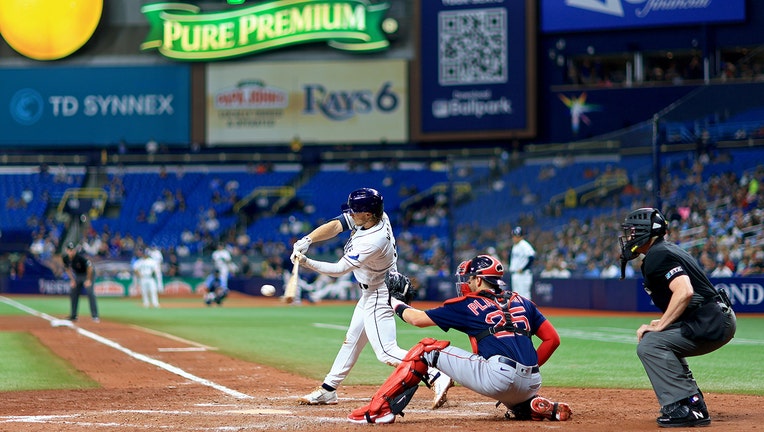 ST PETERSBURG, FLORIDA - JULY 14: Taylor Walls #6 of the Tampa Bay Rays hits in the seventh inning during a game against the Boston Red Sox at Tropicana Field on July 14, 2022 in St Petersburg, Florida. (Photo by Mike Ehrmann/Getty Images)

The Red Sox appeared to be in control with rookie Kutter Crawford taking a three hitter into the seventh and Boston leading 3-0.

Red Sox manager Alex Cora went to normally reliable reliever John Schreiber, who entered with an 0.60 ERA and had stranded all 14 inherited runners this season.

Schreiber (2-1) gave up Walls' game-tying hit and Díaz's go-ahead single. His ERA climbed to 1.16 after giving up two runs and three hits in one inning. It was just the second time in 32 appearances this season that he allowed an earned run.

Crawford ended up allowing three runs and six hits along with six strikeouts.

Tommy Romero (1-0) worked a scoreless seventh to get his first major league win.

Jalen Beeks got his first save since Aug, 19, 2020, despite allowing Alex Verdugo's RBI double with no outs. The lefty struck out pinch-hitter Bobby Dalec and coaxed a grounder from Jeter Downs with two runners on to end it.

Boston All-Star Rafael Devers opened the scoring with a solo homer in the fourth off Drew Rasmussen.

Xander Bogaerts had a two-out double that drove in J.D. Martinez, who had walked, during a two-run fifth inning that put the Red Sox up 3-0. Jarren Duran had a leadoff single and scored on a wild pitch earlier in Bogaerts’ at-bat.

The four-game series at Tropicana Field drew a total of 43,728 fans. In comparison, the average attendance during a three-game series between the teams at Fenway Park July 4-6 averaged 33,774.

Red Sox: RHP Josh Winckowski tested positive after allowing three runs over six innings in Wednesday night’s 4-1 loss to the Rays. Winckowski, who is vaccinated, was placed on the COVID-19 related IL.

Rays: RHP Shane Baz (right elbow sprain) went on the 15-day injured list. The Rays are tied with Cincinnati for the most players on the IL with 17.

Rays: RHP Luis Patiño, sidelined since April 12 with a left oblique strain and blister issues, is expected to start Friday night’s game against Baltimore RHP Tyler Wells (7-4). The Orioles are on a 10-game winning streak and are 45-44 overall. They didn’t get their 45th win last year until Sept. 8, the 138th game of the season.