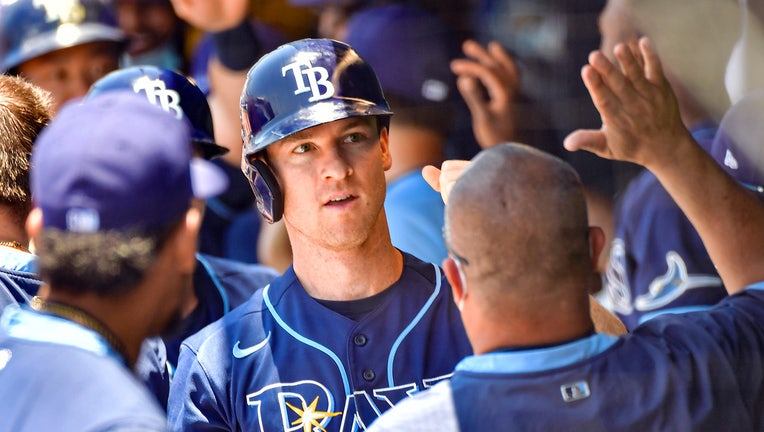 ST PETERSBURG, FLORIDA - MAY 24: Joey Wendle #18 of the Tampa Bay Rays celebrates with teammates after hitting a grand slam in the first inning against the Toronto Blue Jays at Tropicana Field on May 24, 2021 in St Petersburg, Florida. (Photo by Juli

Tampa Bay moved within one win of the team record for consecutive victories. In 2004, playing as the Devil Rays, they won 12 in a row under manager Lou Piniella.

After both teams scored twice in the 10th to make it 7-all, the Rays erupted.

Mejía’s hit came off Joel Payamps (0-2) with the bases loaded. Randy Arozarena doubled home a run, Austin Meadows had an RBI grounder, Manuel Margot knocked in two with a triple and Mike Brosseau added an RBI single against Tim Mayza.

Mejía had a 12th-inning grand slam in the Rays’ 9-7 win over Toronto on Friday night.

A day after the Rays drew five walks during a four-run rally in the ninth to win 6-4, Tampa Bay batters walked seven times. Rays pitchers, meanwhile, walked none.

Joey Wendle hit a grand slam as Tampa Bay took a 5-0 lead in the first. The Rays wound up with a four-game sweep and took over sole possession of first place in the AL East.

Tampa Bay scored twice in the 10th, but Marcus Semien tied it with a two-run homer off Jeffrey Springs (4-1).

Guerrero’s second shot was a two-run drive in the eighth off Ryan Thompson to tie it at 5.

Lourdes Gurriel Jr. and Teoscar Hernández also homered for the Blue Jays, who played their final game at TD Ballpark. Toronto dropped seven of 10 on the final homestand and finished 10-11 at its spring training facility.

The Blue Jays will now relocate to Buffalo, New York, as COVID-19 restrictions in Canada prevent them from playing in Toronto.

Toronto manager Charlie Montoyo opted to have Trent Thornton start the game as an opener in front of the struggling Ross Stripling.

Thornton was on the verge of getting out of first scoreless but third baseman Santiago Espinal booted Margot’s two-out grounder for an error. Ji-Man Choi walked to load the bases and Taylor Walls forced home run on a free pass on a 3-2 pitch.

After Toronto pitching coach Pete Walker was ejected for arguing, Wendle made it 5-0 on his opposite-field drive to left.

Stripling entered in the second and gave up two hits in seven scoreless innings.

Gurriel Jr. had a second-inning homer, and Guerrero and Hernández went back-to-back off Ryan Yarbrough in the fourth to get the Blue Jays within 5-3.

Guerrero has 11 of his 15 homers at TD Ballpark. His first shot to center went 461 feet.

Yarbrough allowed three runs and third hits in six innings and has a 23-start winless streak. The lefty, who normally falls an opener, is 25-5 as a reliever.

The Blue Jays’ home ERA is around one-half run higher than on the road.

Blue Jays: Montoyo said CF George Springer (quadriceps) is improving but no date for a rehab assignment has been announced.