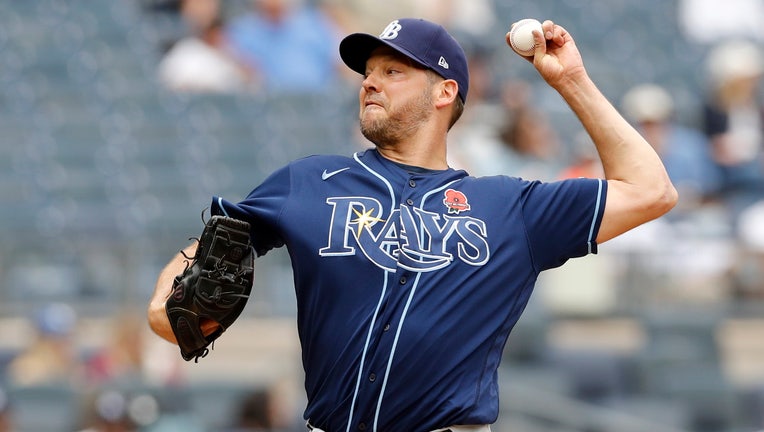 Rich Hill #14 of the Tampa Bay Rays pitches during the first inning against the New York Yankees at Yankee Stadium on May 31, 2021 in New York City. (Photo by Jim McIsaac/Getty Images)

NEW YORK - Rich Hill finished May with the lowest monthly ERA in 75 years of a pitcher in his 40s, and the Tampa Bay Rays won for the 16th time in 17 games by keeping up their domination of the reeling Yankees with a 3-1 victory Monday.

Hill (4-2), a 41-year-old left-hander who is the oldest player in Rays’ history, improved to 3-0 against the Yankees this season. He threw just 56 pitches through five scoreless innings and allowed three hits. Five of New York’s first 16 batters hit his first pitch and six more hit his second.

Rays manager Kevin Cash brought in Michael Wacha to start the sixth, extending Tampa Bay’s record streak of 729 games without a complete game since Matt Andriese’s two-hit shutout of Oakland on May 14, 2016.

Miguel Andújar homered in the seventh, just his second since 2018. Pete Fairbanks struck out Brett Gardner with a man on to end the seventh, Ryan Thompson pitched a perfect eighth and J.P. Feyereisen, acquired May 21 from Milwaukee for shortstop Willy Adames, finished a five-hitter for his third save.

Starting a key seven-game homestand against the AL East-leading Rays and second-place Boston Red Sox, the Yankees could drop back from contention within a week. New York (29-25) limped to the season’s one-third mark with its fourth straight defeat and sixth in seven games. The Yankees have scored two runs or fewer in nine of their last 12 games for the first time since August 1971.

Last weekend at Detroit, the Yankees became the first team in AL history with two runs or fewer and 12 strikeouts in each game of a three-game series, according to STATS.

Shortstop Gleyber Torres made his third error in two days, and the Yankees grounded into their major league-high 52nd double play. Giancarlo Stanton was 0 for 4 and is hitless in 12 at-bats since coming off the injured list.

Both teams wore patches on their jersey chests with red poppy flowers and the words "Lest We Forget," in honor of Memorial Day.

Before a jeering season-high crowd of 17,008 as pandemic restrictions were further eased, Jameson Taillon (1-4) lost to Hill for the second time this year. He allowed three runs and five hits in five-plus innings.

Manuel Margot hit an RBI double in the third as right fielder Aaron Judge overthrew the cutoff man, and the Rays never trailed for the fifth straight game,

Austin Meadows homered into the right-field short porch in the fourth and Randy Arozarena had an RBI single in the fifth. Meadows’ 334-foot drive would not have been out of any other big league ballpark.

Yankees: RHP Luis Severino (Tommy John surgery on Feb. 27 last year) was to pitch a three-inning simulated game Monday and start a rehab assignment on Sunday for Low A Tampa, which would start a 30-day timetable for his possible return to the major league level. ... LHP Zack Britton (surgery March 15 to remove bone chip from left elbow) is to make his second rehab appearance Tuesday. ... RHP Darren O’Day (strained right rotator cuff) has thrown for three days in a row.