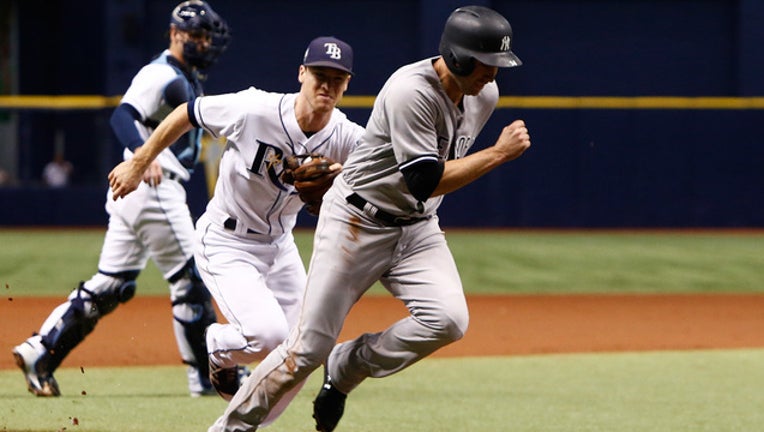 ST. PETERSBURG, Fla. (AP) - Luis Severino is making his bid to be on the mound and throwing to catcher Gary Sanchez in the New York Yankees' playoff opener.

Severino won his 19th game, the struggling Sanchez drove in four runs for the first time since early April and the Yankees beat the Tampa Bay Rays 9-2 on Tuesday night to keep up their push for home-field advantage in the AL wild-card game.

Severino (19-8) is competing for Masahiro Tanaka and J.A. Happ to start in the Oct. 3 winner-take-all game, most likely against Oakland. The Yankees began the night 1½ games ahead of the Athletics for home-field advantage.

"I'm ready for anything," Severino said.

Severino was 14-2 at the All-Star break but lost six of his next nine decisions before beating Boston and Tampa Bay in his last two outings. He gave up two runs and four hits in five-plus innings, and is third in the major leagues in wins behind Tampa Bay's Blake Snell (21) and Cleveland's Corey Kluber (20).

"It was a long inning," Severino said. "I don't think I warmed up that good. But after that everything was great."

Brandon Lowe hit a two-run double with no outs, but Ji-Man Choi was thrown out trying to score from first. Choi was hurt on the play and needed stitches for a cut left ear and also experienced concussion-like symptoms.

"I think he's just struggled to find his way a little bit offensively and dug himself a hole," Yankees manager Aaron Boone said. "The one thing I keep telling him, it's not too late to dig out."

Sanchez hit a three-run homer off Jalen Beeks, his first long ball since Sept. 10, and added an RBI single in the fifth.

"Definitely a tough season for me," Sanchez said through a translator. "But, whatever I've already done this season is in the past, and the struggles are in the past. This definitely won't be a season that's going to be one favorites, for sure. The focus is to concentrate on the next game and concentrate to keep performing and help the team."

Adeiny Hechavarria homered against Jake Faria (4-4) leading off the third. Luke Voit had an RBI double, Beeks walked Neil Walker with the bases loaded, Miguel Andujar hit a sacrifice fly and Sanchez followed with his 17th homer. Sanchez's only other four-RBI game this year was April 11 against Boston.

Faria allowed three runs and four hits in 2 1/3 innings. His night ended after catching a 108.5 mph head-high liner by Aaron Judge. The right-hander bent over afterwards with both hands on his legs and exhaled.

"I threw my hands up to get my head out of the way and the ball went in my glove," Faria said. "I've never seen anything hit that hard come at my face before."

Rays LF Tommy Pham doubled in the first and extended his career-high on-base streak to 27 games, the longest active run in the AL. He has a hit in 26 of them. Pham got hit near the left elbow by a Severino pitch in the third but stayed in the game

INF Thairo Estrada hit a long homer in his first instructional league game against the Pirates. He started the year on the DL after being shot in the right thigh during a January robbery attempt in Venezuela and then had a regular season-ending back injury at Triple-A Scranton-Wilkes/Barre.

Yankees Tanaka (12-5) starts Wednesday for the Yankees. He has allowed two or fewer runs in nine of his last 12 starts. The Rays will use reliever Ryne Stanek (2-3) as the opener.