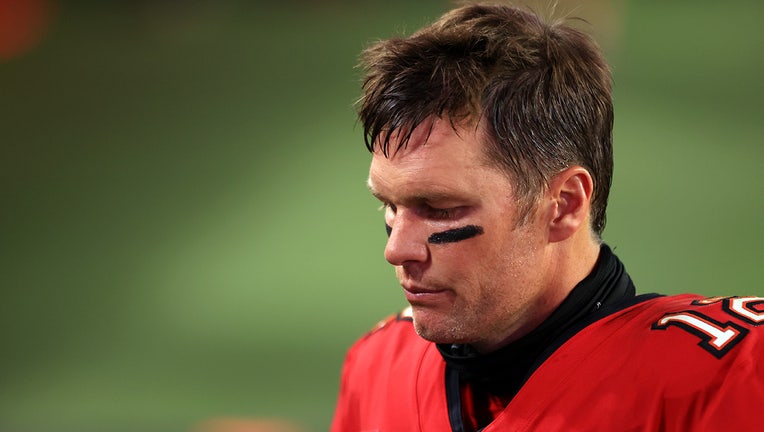 Tom Brady of the Tampa Bay Buccaneers reacts following their game against the Kansas City Chiefs at Raymond James Stadium on November 29, 2020 in Tampa, Florida. The Chiefs won 27-24 over the Buccaneers. (Photo by Mike Ehrmann/Getty Images)

The Bucs (7-5) rebounded from falling behind by three scores in the opening quarter Sunday, but ultimately couldn’t catch the Kansas City Chiefs in a 27-24 loss to the reigning Super Bowl champions.

Tampa Bay has been outscored 52-7 in the first quarter of the past four games and has lost three times at home during that stretch.

“Early in the game for whatever reason, we’re not making the plays,” coach Bruce Arians said. “We’re not getting open, we’re not protecting, just not making enough plays.”

Same for the defense.

“That’s the speed of the game,” Arians added. “We talked about it all week, to play faster. We made some plays, we didn’t make enough. We did a good job of holding them to three (points), then we gave up the two big chunk plays to Tyreek Hill.”

Recognizing that the Buccaneers seem stuck in mud when games begin, Patrick Mahomes and the Chiefs came out firing with their downfield passing game, building a 17-0 lead. Hill led the surge with seven catches for 203 yards and two touchdowns in the first quarter alone.

“We had him man to man,” Arians said. “We tried to get a safety to him when we could, but (tight end Travis) Kelce is there on the other end, too. When we played him man to man, Patrick found him for some big plays.”

Tampa Bay managed one first down on its first four drives. Brady was 0 for 3 on third downs during that stretch.

“We just missed third downs,” Arians said. “We had very manageable third downs. They did a good job in their blitz package and we didn’t execute on our end. Most of (the third downs) have been seven yards or less, where we’ve been good all season.”

Patrick Mahomes threw for 462 yards and three touchdowns to outplay Tom Brady and lead the Kansas City Chiefs to a 27-24 victory over the Tampa Bay Buccaneers on Sunday.

More than half of Mahomes’ 462 passing yards came in the first quarter while the Bucs’ defense was on its heels, unable to cover Hill on touchdown catches of 75 and 44 yards. The defense performed significantly better the rest of the game, but the damage was already done.

“We have to be able to adjust early and make the adjustments on the sideline,” linebacker Devin White said. “We can’t wait until halftime to make the changes. We have to start faster and not let teams drive for touchdowns early in the game.”

Brady and the Bucs have lost to the Saints, Rams and Chiefs— all strong teams — during this poor home stretch. New Orleans leads the division at 9-2, and while the Bucs still are in good shape to make the playoffs as a wild card, they’re living dangerously.

“I think football is so much about being in that rhythm and staying in rhythm and finding your rhythm,” Brady said. “I think as we keep going forward, we are learning more and more about ourselves, about what we need to do. Going to get back to work and try and do a lot better of a job the last quarter of the season.”

Tampa Bay has a bye next week, giving the team time to search for answers.

“We are as good as we want to be,” linebacker Shaq Barrett said. “We can compete with (anyone), but competing is not enough. We need to make the plays. We can’t just keep being close.”