TAMPA, Fla. - South Carolina won’t be going to a bowl game, after all. The Gamecocks, who finished 2-8, opted out of the Gasparilla Bowl against UAB on Tuesday due to positive COVID-19 tests and contact tracing within the program.

The game at Raymond James Stadium in Tampa was scheduled for Saturday but the move by South Carolina left UAB without an opponent, forcing organizers to cancel.

"The current environment has presented many challenges," said Scott Glaser, executive director of ESPN Events. "We looked into a number of options for UAB, but ultimately could not identify any opportunities for them to play at this time. We are appreciative of the many supporters in the community, including our new title sponsor – Union Home Mortgage, and look forward to staging the game in 2021."

Tickets will be automatically refunded, the statement from ESPN Events added.

At least 16 bowls have been canceled this season because of pandemic-related reasons. The Liberty Bowl lost Tennessee and filled the open slot against West Virginia with Army earlier this week. 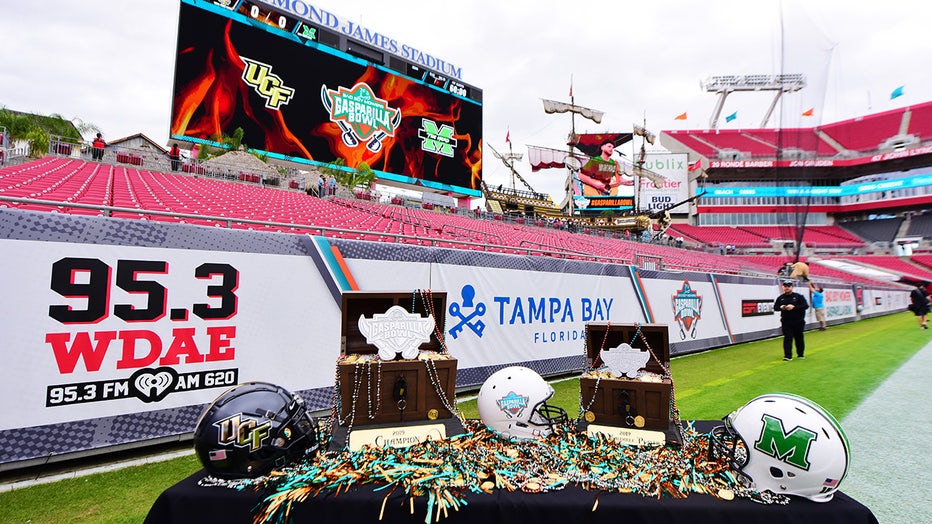 The UCF Knights and Marshall Thundering Herd helmets with the Gasparilla Trophy at Raymond James Stadium prior to the Gasparilla Bowl on December 23, 2019 in Tampa, Florida. (Photo by Julio Aguilar/Getty Images)