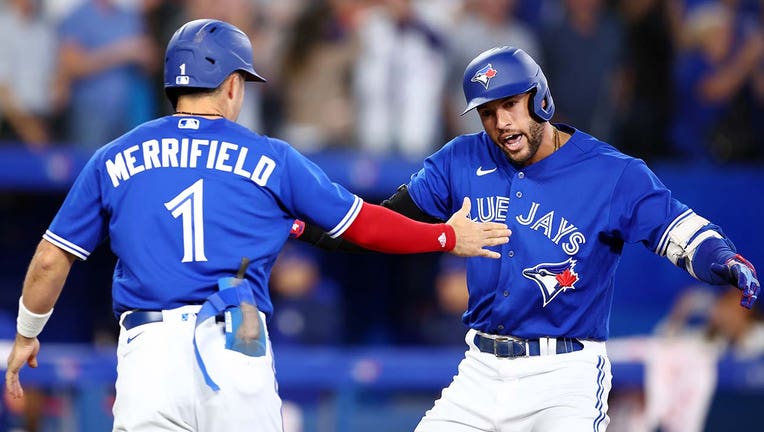 TORONTO, ON - SEPTEMBER 13: George Springer #4 of the Toronto Blue Jays celebrates with Whit Merrifield #1 after hitting a two-run home run in the seventh inning during game two of a doubleheader against the Tampa Bay Rays at Rogers Centre on Septemb

Toronto trailed 2-1 before rallying with a four-run seventh against left-hander Colin Poche (4-2). Pinch-hitter Santiago Espinal walked and advanced to third on two wild pitches. Pinch-hitter Danny Jansen drew a one-out walk and was replaced by pinch- runner Bradley Zimmer. Merrifield followed with a double down the third-base line,

Springer homered to reach 20 for the seventh time.

Teoscar Hernández hit an RBI double off Kevin Herget in the eighth and scored on Matt Chapman’s sacrifice fly.

Anthony Bass (4-3) got one out for the win. Adam Cimber retired two batters in the eighth and Jordan Romano got pinch-hitter Yandy Díaz to ground into a forceout with runners at the corners.

Once Toronto stretched its lead to five, Zach Pop wrapped it up in the ninth.

Poche allowed four runs and two hits in one-third of an inning.

After being scratched from the opener because of a stomach illness, Alek Manoah allowed two runs and five hits over 6 2/3 innings in the nightcap. He struck out five and walked two, leaving to a standing ovation.

Toronto tied it in the sixth when Vladimir Guerrero Jr. doubled and scored on Alejandro Kirk’s swinging bunt.

Aranda restored Tampa Bay’s lead when he connected on an 0-1 pitch from Manoah to begin the seventh.

Rays right-hander Yonny Chirinos was added as the 29th man for the doubleheader and started the second game allowing three hits in four-plus shutout innings. Chirinos left after hitting Matt Chapman with a pitch starting the fifth.

In the opener, Tampa Bay left-hander Jeffrey Springs (8-4) pitched six shutout innings to win for the fifth time in six decisions, Randy Arozarena drove in two runs and Díaz had three hits and scored twice as the Rays won 4-2 to snap a three-game losing streak.

Rays: 2B Brandon Lowe (back) was held out of the lineup in both games. … RHP Tyler Gasnow (elbow surgery) allowed one run and one hit in 1 1/3 innings in his second rehab start with Triple-A Durham. Glasnow struck out two and walked two.

Before Chirinos threw his first pitch, home plate umpire Dan Merzel brought him a towel from the dugout and asked Chirinos to wipe his left forearm.