TAMPA, Fla. - Steven Stamkos tipped in his 24th goal of the season in the third period and led the Tampa Bay Lightning to a 4-2 win 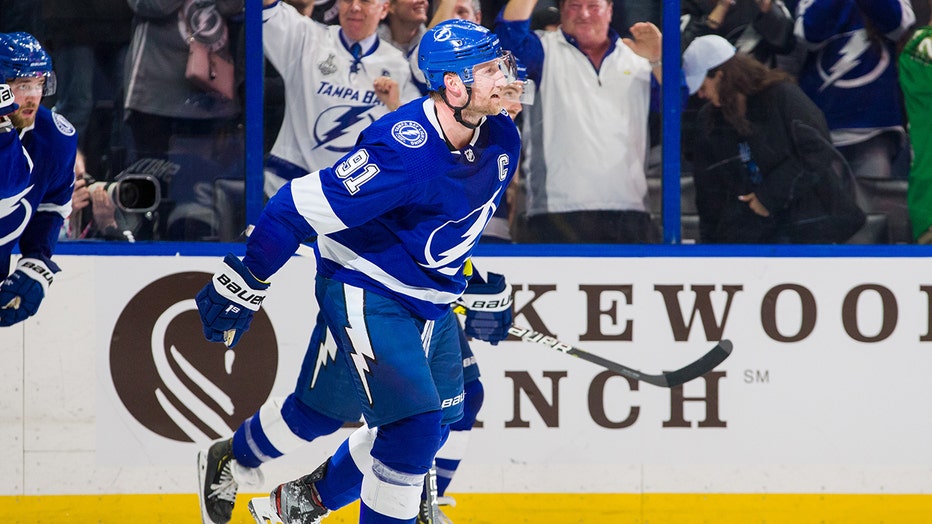 Steven Stamkos #91 celebrates his goal against the Vegas Golden Knights during the third period at Amalie Arena on February 4, 2020 in Tampa, Florida. (Scott Audette/NHLI / Getty Images)

over the Vegas Golden Knights on Tuesday night.

Andrei Vasilevskiy made 28 saves and extended his streak of consecutive games without a regulation loss to 16 games, matching the franchise record set by Nikolai Khabibulin in 2002-03.

Stamkos was in front of Fleury when Point wheeled around from the high slot and sent a shot on net that Stamkos deflected just inside the right post at 10:36, extending his scoring streak to seven games.

Point opened the scoring with his 19th goal of the season, scoring on a wrist shot from between the circles at 10:57 of the first period. Carrier pulled Vegas even at 15:42. He took a pass from Brayden McNabb and sent a wrist a shot past Vasilevskiy for his sixth goal of the season.

Tampa Bay regained the lead late in the period on a double deflection. Ondrej Palat’s shot first hit the blade of Anthony Cirelli’s stick and then the shaft of Johnson’s stick, finding the back of the net at 17:57.

Vegas failed to take advantage of three power-play chance in the second period as the league’s fourth ranked penalty kill unit limited the Golden Knights to one shot on goal and four total attempts during the 5:07 of total time with the man advantage.

Vegas scored a tying goal early in the third period as Stastny tipped a shot from Jonathan Marchessault and tucked it inside the left post at 3:47.