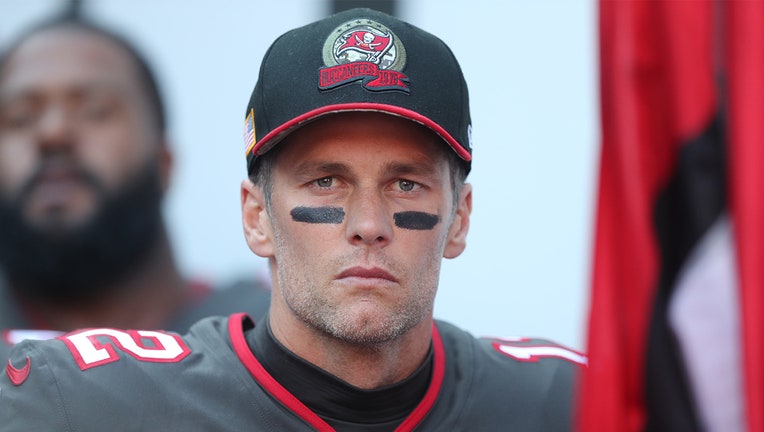 Tampa Bay Buccaneers quarterback Tom Brady (12) looks out towards the field moments before he is introduced before the regular season game between the Cincinnati Bengals and the Tampa Bay Buccaneers on December 18, 2022 at Raymond James Stadium in Ta

TAMPA, Fla. - The Tampa Bay Buccaneers led by two touchdowns at halftime and appeared poised to grab a two-game lead in the woeful NFC South.

But a second-half meltdown saw AFC North-leading Cincinnati storm back for a 34-23 victory on Sunday.

At 6-8, the Bucs are the lone team in their division with a chance to finish the regular season with a winning record. Carolina, Atlanta and New Orleans — all 5-9 — remain in the hunt for the division title and a playoff berth.

After playing at Arizona next Sunday, Tampa Bay closes out the season with games against the Panthers, who beat the Bucs earlier this year, and the Falcons.

READ: Bucs have a clear focus on what's ahead

"We have three games left to try and save our season," Tampa Bay coach Todd Bowles said.

But Joe Burrow threw for four second-half touchdowns, keyed by Tampa Bay giveaways, as the Bengals (10-4) won for the sixth straight time.

In fact, the entire third quarter was played inside the Bucs' 40.

The collapse started when a fake punt on fourth-and-1 at the Tampa Bay 26 went awry,

Running back Giovani Bernard, in the upback position, appeared surprised by a direct snap and fumbled the ball.

Bowles said the team had practiced the play all week.

"Miscommunication," Bernard said. "That’s something I did wrong, and that’s all there is."

That miscue led to a field goal that cut the Bengals’ deficit to 17-6.

Brady then threw an interception, the first of four straight Bucs possessions that ended with turnovers. The 45-year-old quarterback lost two fumbles before throwing his second pick.

Burrow’s third TD strike of the second half, an 8-yard completion to Ja’Marr Chase, made it 27-17 just over three minutes into the fourth quarter.

Brady was 30 of 44 for 312 yards, three touchdowns, and two interceptions as he lost for the first time in his 23-year career after leading by at least 17 points. He entered 89-0 in those games.

"We’ve got a huge game coming up, so I know we keep saying it but it’s reality, we’ve got to go make it better," Brady said.

Tampa Bay linebacker Lavonte David declined to talk in the sullen Bucs locker room. Teammate Devin White said the Bucs’ dominant first half is something to build on.

"You see what kind of performance we can do," the linebacker said. "If we can put together those for four quarters, man, we’re one of the best teams in this thing. I truly believe that."