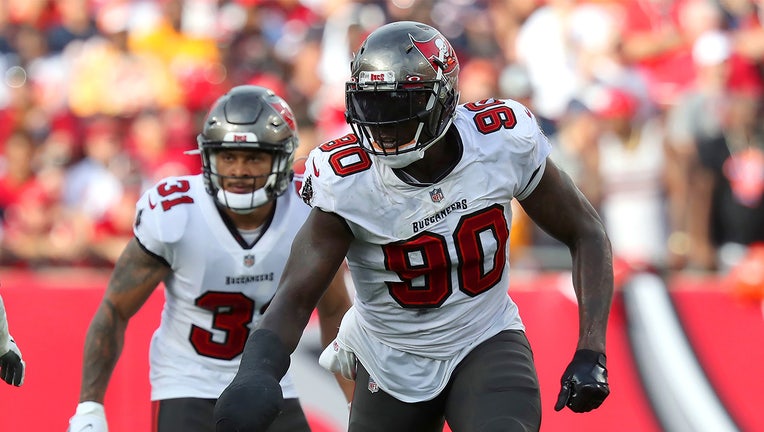 The reigning Super Bowl champions (6-1) are off to their best start in franchise history, with Tom Brady showing no signs of slowing down at age 44 and an injury-depleted defense that’s thriving, too, despite being without several key players.

Without injuries in the secondary to cornerbacks Sean Murphy-Bunting, Carlton Davis and Richard Sherman, unheralded backups such Dee Delaney and Pierre Desir would not be playing much — if at all — on a talented defense that was a big part of Tampa Bay’s championship run last season.

Delaney and Desir both had interceptions during Sunday’s 38-3 rout of the Chicago Bears, leaving coach Bruce Arians marveling about the job Bucs general manager Jason Licht and vice president of player personnel John Spytek have done constructing a deep roster.

"It’s the next-man-up mentality. Somebody is going to come in and fill those roles, and we don’t plan to drop off if somebody goes down. Everyone is expected to play at the same level, no matter who you are," said safety Antoine Winfield Jr., who returned to the lineup Sunday after missing two games because of a concussion.

"It’s always the next man up, and if you don’t believe in it, if you just say it, it won’t happen. We truly believe it and we talk to these guys — when you’re on this team, you have a role. Accept your role. At any point in time, that role’s going to change; the level of play and expectation level doesn’t change," Arians said.

"If you’ve got a Buccaneer helmet on, there’s a level of play that’s all that will be accepted," the coach added, "and these guys have risen to the challenge."

Tom Brady leads the league is passing yards and TD passes, but the Buccaneers are at their best offensively when the running game is cooking, too.

The Super Bowl champs ran for a season-best 182 yards on 31 attempts against the Bears, with Leonard Fournette (15 carries, 81 yards, one TD), Ronald Jones (10 carries, 63 yards) and Ke’Shawn Vaughn (five carries, 27 yards) all averaging more than 5 yards per attempt.

Despite scoring 38 points in Sunday’s victory, Arians was not happy with the way the offense played, particularly after halftime when the Bucs were held to three points and turned the ball over on downs on another possession after having first-and-goal from the Chicago 2.

The offensive line has done an excellent job of protecting Brady, allowing just nine sacks through seven games. The Bucs didn’t yield to the Khalil Mack-led Bears pass rush, which entered the game tied for the league lead with 21 sacks.

Rookie quarterbacks vs. Brady. Since 2014, Brady is 10-0 in matchups against teams led by rookie quarterbacks. Todd Bowles’ defenses have a pretty good track record against young QBs, too, and sacked Chicago’s Justin Fields four times and forced five turnovers.

Arians is hopeful that linebacker Lavonte David (ankle), tight end Rob Gronkowski (ribs) and possibly Richard Sherman (hamstring) will be able to return to practice this week. Gronkowski has missed the past four games and David the past two. Sherman sat out against Chicago after being injured the previous week. Arians did not have an update Monday on cornerbacks Jamel Dean (shoulder) and Dee Delaney (ankle), who were hurt Sunday.

Visit New Orleans next Sunday. The Saints swept the 2020 season series between the NFC South rivals only to be eliminated from the playoffs by the Bucs last January.