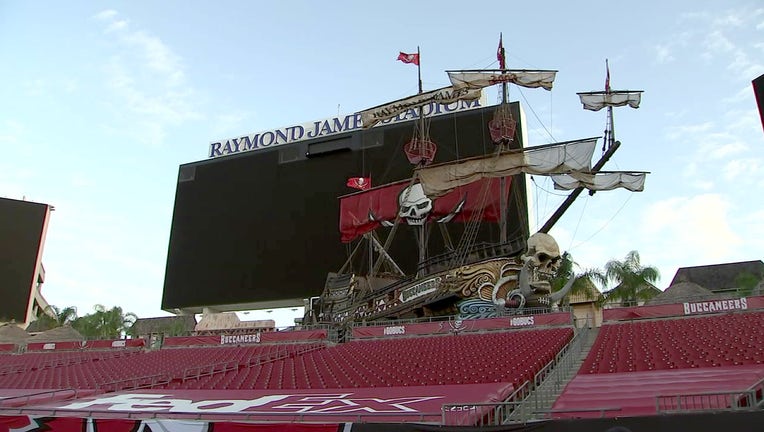 TAMPA, Fla. - The Tampa Bay Buccaneers have a chance to make history at Green Bay on Sunday. If they do, it might come with an asterisk.

No team has ever played a Super Bowl in its home stadium. Tom Brady and the underdog Bucs (13-5) will try to become the first to do so by winning the NFC championship game against the Packers (14-3). The Super Bowl will take place two weeks later at Raymond James Stadium in Tampa, Florida.

It would be some feat for the wild-card Bucs to reach the NFL finale after playing three road playoff games. The prize would be much different this year, though, because the Super Bowl will be played in front of a far smaller crowd than usual.

Tampa Bay averaged 14,483 fans for its eight home games in 2020 — about 22% of stadium capacity. The NFL is planning for 20% capacity at the Super Bowl on Feb. 7, according to ESPN. Fans will be in pods separated by 6 feet, and masks will be required in accordance with local COVID-19 safety protocols.

The city of Tampa faces a big challenge to make sure the Super Bowl next month doesn't become a COVID-19 super spreader event. Preventing that is priority number-one, according to organizers today at the NFL Fan Experience.

Capacity at Raymond James Stadium is 65,890, so a little more than 13,000 fans are expected inside to finish a season played during a pandemic. It’s a huge drop from the 75,000 that would have been expected with additional temporary bleachers in the end zones.

So if Tampa Bay advances to the big game, it won’t gain a significant advantage by playing in front of its home crowd. Technically, it won’t even be a sellout, and the game would set an attendance record for the smallest Super Bowl crowd.

Bucs one win away from Super Bowl in Tampa

No NFL team has ever played in the Super Bowl on their home turf.

The first Super Bowl in 1967 was played in front of 61,946 fans at the Los Angeles Coliseum. It’s the only one that didn’t sell out.

In the 53 Super Bowls since, just two teams have played the game in their home region: the 1984 San Francisco 49ers beat Miami in Super Bowl 19 in Stanford Stadium rather than Candlestick Park; and the 1979 Los Angeles Rams lost Super Bowl 14 to Pittsburgh in the Rose Bowl instead of the Los Angeles Memorial Coliseum.

NFL Fan Experience goes up ahead of big game

Workers are transforming Julian B. Lane Park into the Super Bowl Experience, an interactive NFL theme park with family games and entertainment, the Lombardi Trophy on display, and virtual meet-and-greets by NFL greats.

Here’s a look at the other NFL teams that made the playoffs the season their home stadiums hosted the Super Bowl and came up short: