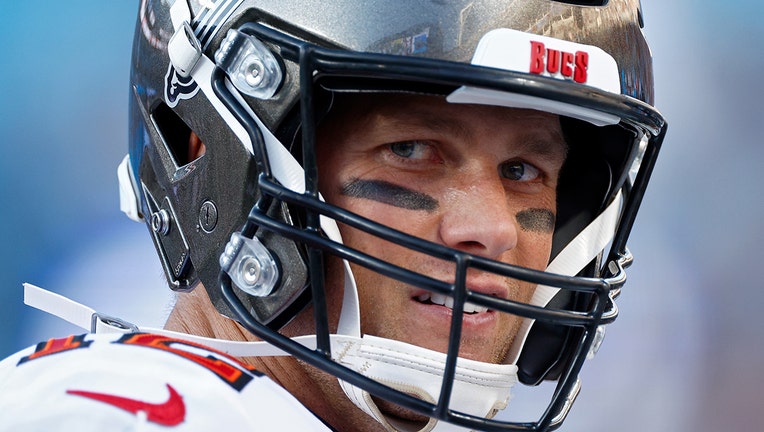 CHARLOTTE, NORTH CAROLINA - DECEMBER 26: Tom Brady #12 of the Tampa Bay Buccaneers on the sidelines during the fourth quarter in the game against the Carolina Panthers at Bank of America Stadium on December 26, 2021 in Charlotte, North Carolina. (Pho

CHARLOTTE, N.C. - As Buccaneers coach Bruce Arians watched Antonio Brown go through practice last week, he could tell the veteran wide receiver was in great shape and had some fresh legs.

Brown felt it too, telling his coach "Whatever you need, I’m there."

Turns out that was quite a bit.

Tom Brady threw for 232 yards and a touchdown and Brown made a grand return to the NFL on Sunday as the Tampa Bay Buccaneers routed the Carolina Panthers 32-6 to win their first NFC South title since 2007.

"We haven’t had one of those division banners for a long time," Arians said. "It feels great. This is what we focused on: winning the division. I can’t be more proud of the group than I am today."

Brown saw a prominent role on offense with Mike Evans and Chris Godwin sidelined by injuries, catching 10 passes for 101 yards while being targeted 15 times by Brady in his first game since Oct. 13.

He repeatedly made big catches in a featured role against 2019 NFL Defensive Player of the Year Stephon Gilmore to move the chains early in the game.

"He’s been itching to get back out there," Brady said of Brown, a player he helped persuade to come to Tampa Bay last year. "And he’s just putting himself in a position to succeed. He makes a lot of critical plays. It was a great performance by him."

Brown has been plagued by an ankle injury and was suspended three games for breaking COVID-19 protocols prior. He was unapologetic about the suspension and refused to elaborate on the details surrounding what happened.

"I can’t control what people write, how people try to frame me or bring me down," Brown said. "Life is about persevering and doing what’s right. ... I’m standing here humble and grateful and thankful and excited being around a great win with my teammates."

Brown’s return was huge for the Bucs, who proved they can win even with many of their top weapons out.

Ronald Jones replaced the injured Leonard Fournette and carried 20 times for 65 yards and a touchdown.

Tampa Bay also got big offensive contributions from unheralded players like Ke’Shawn Vaughn, who ran for a 55-yard touchdown, and Cyril Grayson, a COVID-19 replacement player elevated to the active roster this week who hauled in a 62-yard reception to set up Brady’s only TD pass, a 4-yarder to Cameron Brate.

"Different guys who haven’t had as many opportunities made a lot of great plays," Brady said. "AB (Brown) played great just like he always does. We needed it with Mike out, Chris out. ... Our line played great. Our backs played really well. We’ve got to keep finding ways to win."

The Bucs’ defense had no problems shutting down Carolina’s dual-quarterback approach, even after Pro Bowl linebacker Shaquil Barrett left with a knee injury in the second quarter.

Tampa Bay had seven sacks and limited the Panthers (5-10) to two field goals.

But neither QB produced.

Newton was 7 of 13 for 61 yards and ran for 42 yards en route to losing his 13th straight game as a Carolina starter, a streak that dates back to the 2018 season. Darnold, who was greeted by boos as he entered the game for the first time, finished 15 of 33 for 190 yards.

Rhule said he felt going with two QBs gave his team the best chance to win, before adding "giving up seven sacks, you aren’t going to win many games like that."

The Panthers fell to 10-21 in two seasons under Rhule, who heard chants of "Fire Rhule" during the game and was booed as he walked off the field after the game.

Rhule said he understands the fans’ frustrations and said he appreciates their passion. He apologized for the lack of winning but promised better times are ahead, saying "I believe 1000% the process is working."

Buccaneers: Arians said after the game Barrett had a mild MCL sprain in his knee, but wouldn’t say how long he will be out.

Panthers: Stephon Gilmore became the latest Carolina cornerback to get hit by the injury bug, leaving in the second half with a groin injury. ... WR Brandon Zylstra was placed on the COVID-19 list before the game.

Buccaneers: at the New York Jets next Sunday.

Panthers: at New Orleans next Sunday.