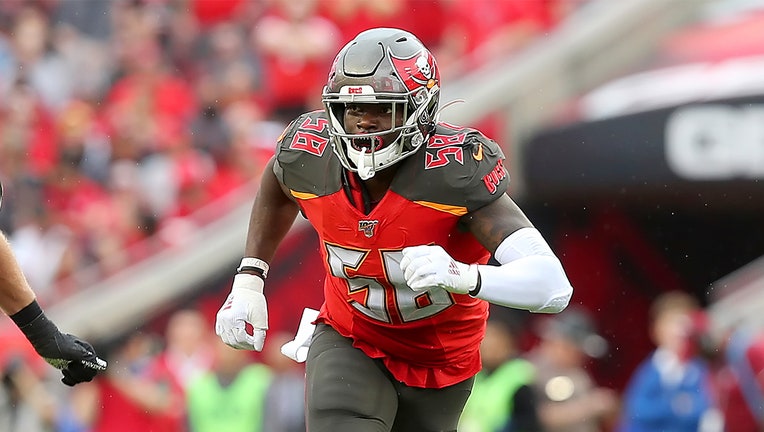 Shaquil Barrett (58) of the Bucs rushes the passer during the regular season game between the Houston Texans and the Tampa Bay Buccaneers on December 21, 2019 at Raymond James Stadium in Tampa, Florida. (Cliff Welch/Icon Sportswire via Getty Images)

On Monday morning, the team made the announcement saying Barrett was due to become an unrestricted free agent on March 18. Barrett led the NFL in sacks with 19.5 in 2019. The deadline to apply a franchise or transition tags was Monday after it was delayed twice.

The franchise tag means Barrett is allowed to negotiate with other teams, but the Tampa Bay team has the right to match any contract he is offered. According to the team, if he does sign with another team and the offer is not matched, that team must send two first-round draft picks to the Bucs.

According to a statement from the Tampa Bay Buccaneers, the franchise tag doesn’t mean Barrett and the Bucs have to stop negotiating on a new long-term contract. The team says “the tag is often utilized as a way for a team to extend its negotiating window with a player it wants to retain with a longer deal.”

“The Buccaneers believed he could provide even greater production in a larger role, though even they couldn't have predicted that Barrett would nearly become the just 12th player in NFL history to reach 20 sacks in a season.”

The Bucs say they have 18 players who will become unrestricted free agents on March 18, including quarterback Jameis Winston.