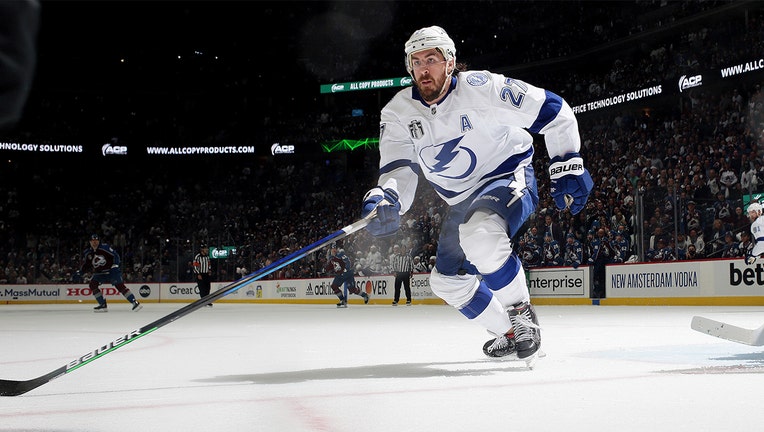 DENVER, COLORADO - JUNE 24: Ryan McDonagh #27 of the Tampa Bay Lightning looks to clear the puck against the Colorado Avalanche in Game Five of the 2022 Stanley Cup Final at Ball Arena on June 24, 2022 in Denver, Colorado. The Lightning defeated the

TAMPA, Fla. - Julien BriseBois wanted to explain his plan to Ryan McDonagh in person, laying out exactly why he was asking the veteran defenseman to waive his no-trade clause.

After one of the most difficult conversations in his tenure as general manager, BriseBois made perhaps his toughest move yet during the Tampa Bay Lightning’s run of success by trading a prominent member of two Stanley Cup championship teams in an effort to win it again in the coming years.

The Lightning sent McDonagh to the Nashville Predators on Sunday for younger defenseman Philippe Myers and forward prospect Grant Mismash, clearing significant salary cap space to make more moves this offseason and setting up Tampa Bay to keep younger core players around for the long term.

After previously forecasting his team’s Cup window lasting through only next season, BriseBois moving McDonagh has changed the game for the NHL’s most successful franchise over the past five years.

The immediate aftermath of exchanging McDonagh’s $6.75 million cap hit for Myers’ $2.55 million could allow the Eastern Conference champions to bring back top left winger and playoff star Ondrej Palat and/or dependable defender Jan Rutta, each of whom was set to be a free agent when the market opens July 13.

BriseBois did not have an update on either situation, but acknowledged moving McDonagh does open the door to more possibilities. He plans to speak with the agents for Palat and Rutta in the coming days.

Those should be better discussions than talking to McDonagh about why he needed to prioritize other players for the future and hoped to find a trade partner for the 33-year-old, who finished the playoffs and helped Tampa Bay make a third consecutive final by playing with a mangled finger. Above all else, McDonagh was known for sacrificing his body to block shots while locking down opponents’ top stars.

BriseBois said if the salary cap was expected to increase more, he never would have considered asking McDonagh to waive his no-trade clause and would have been glad to have him under contract for four more seasons.

The Predators now get those years and another seasoned player on the blue line who has reached the playoffs in each of his 12 NHL seasons. In a statement released by the team, general manager David Poile called McDonagh "the ultimate team player who will bring experience and leadership" and someone who can play in all situations.

"It’s been incredible five years," McDonagh said of his time with Tampa Bay. "Looking forward to utilizing all the experience that I’ve had on the losing side and the winning side to hopefully do something special with the Nashville group."

Myers has now been traded in consecutive offseason after going from Philadelphia to Nashville last summer in the deal that sent defenseman Ryan Ellis to the Flyers. The 25-year-old becomes Tampa Bay’s latest value rehab project after struggling so much last season the Predators put him on waivers and loaned him to Toronto’s top minor league affiliate.

BriseBois said the plan was to work with Myers rather than exploring buying out the final year of his contract.

"For whatever reason, things didn’t work out for him at the tail end in Philly and in Nashville last season," he said. "We figure there are enough tools there that intrigue us enough to work with him and help him reach the potential we saw not too much long ago."